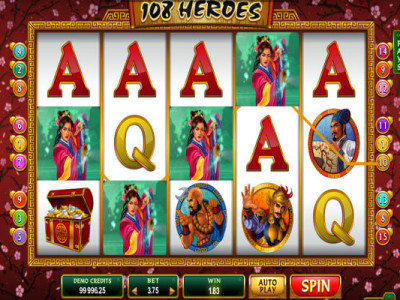 108 Heroes is a five reeled video pokie machine that comes packed with an entertaining gaming ride that is like none other. The game can be played for fun right here as players try it out with demo credits before they can start placing real bets at online casinos that offer the game. The game has 5 reels that boast fifteen bet lines, that are full of great rewards and bonus features for players to claim during the game play. Players can check out all of the line payouts of the game as well as the special features of the game by clicking on the Pays button.

108 Heroes is an Asian themed vide pokie machine that is powered by Microgaming. It is one of the latest games to be released by the gaming developer. The game takes players on an exciting experience that is action packed that takes place in the Far East as a group of deadly martial art experts, warriors and even warlocks who are engaging in an all out war. So get ready for a remarkable gaming experience that is full of winning chances and advanced game play options.

108 Heroes by Microgaming is a top notch game that is one of the latest pokies by the gaming developer to hit the market. The game can be played right here for fun with demo credits. The game has a 5 reeled setup and gives players 15 winning chances across its fifteen wager lines. The game is entitled 108 Heroes, and this is because the game takes place in the Far East as players join a deadly group of 108 Heroes that include warriors, martial arts fighters, and warlocks. This theme is depicted across the reels as players will see the different heroes and warriors appearing as symbols across the reels and lines of the pokie to help them get paid by triggering line pays as well as special features.

The game has a wide wagering range that makes sure that the pokie appeals to different types of players with varying gambling budgets. It varies between 0.01 and 75 credits for each spin. This range is a result of the number of lines, number of coins and the value of the used coins.

The game has a wild icon, which comes in the form of the logo of the game “108 Heroes”. This wild can replace different icons, except the other special icons, and it can also give generous line payouts when it gets matched across the lines.

The treasure chest is the bonus icon of the game, three of them would trigger the King’s Treasure bonus round in which players will click on different treasure chests in a 2nd screen to reveal the great prizes that they have. Lastly, the game has a scatter Asian symbol that gives out multiplied prizes, as well as a free spins round during which all winnings will be tripled.