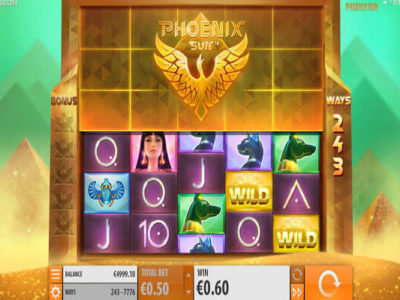 Quickspin is always adding new games to its portfolio, and the newest game is Phoenix Sun that we have right here. This new game takes players on a wonderful gaming experience that is all about the Ancient Egyptian gods and the Pharaohs. Therefore, players will get to travel back to the times of Ancient Egypt, where they can get to claim their own share of their golden fortunes. Try out the game here for free without placing any real money bets before trying out the game at online casinos. Check what the game has to offer, its features and more.

Phoenix Sun is a Quickspin game. It is the newest game by the developer. The game takes players on an ancient Egyptian ride that is like none other. The game has everything players would be looking for in a slot machine. This includes a great theme that is quite entertaining, wonderful visuals and sounds as well as many winning chances and special features. Therefore, the game has become quite a hit at all online casinos that host Quickspin games.

Phoenix Sun is a new Quickspin game that has a 5 reeled setup that houses 243 ways to win. The game has 2 sets of reels. One at the bottom which is active during the base game play, there is a reel set at the top that is locked, and it becomes a part of the game play during the re spins feature. When that happens, the game will boost its number of ways to win to reach 7776.

The game’s theme is all about ancient Egypt, its gods, and its fortunes. This is why players will see that the reel set of the game is located in ancient Egypt with the sand and the pyramids in the background. As for the symbols that would appear across the reels of the game of the game, they include Anubis, Bastet, Tutankhamun and Cleopatra. They also include poker card icons and golden wilds. All of the icons and the visuals of the game are of the highest quality that provides players with an immersive ride.

Phoenix Sun is not only an exciting game that has an immersive game play, as it comes with a great set of special icons and features. The game has two wilds; there is the regular golden wild that would replace other icons. There is also the Phoenix Golden Wild that will replace other icons and can trigger the Phoenix Wild Re spins bonus round. During that round, players will claim free spins and will activate the upper set of reels to have a total of 7776 ways to win.