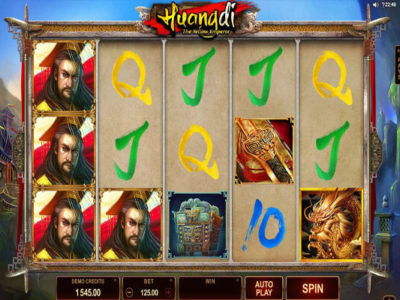 Huangdi The Yellow Emperor is a new Microgaming slot machine that offers players an exquisite and a highly rewarding experience. The game takes players on an Asian themed experience that is full of features and treasures. Players will have the chance to claim their share of the Chinese fortunes through the wager lines of the game, as well as with the help of the game’s special features and icons.
The game can be checked out here for free, where players can spin the reels of the game for fun with demo credits. This gives them the ability to see what the slot has to offer, prior to placing any real money on the game at online casinos that offer the game.

Huangdi The Yellow Emperor is one of the great mythical characters from the Ancient Chinese civilization. He is said to be the initiator of the Chinese culture, and he is also said to be the grandfather of all of the Chinese. This is why Microgaming has decided to create a game that is dedicated to this mythical character. The game comes packing plenty of winning chances, wonderful visuals and an overall amazing experience that players will never get enough of.

The game’s wagering options are found underneath the reels as a part of the control panel. Players will find 2 options at the Bet Cell. The first option is the coin size which varies between 0.01 and 0.50 and players can place from 1 up to 10 coins per line. This creates a betting range that is between 0.25 and 125 credits per spin.

When it comes to special features and bonus rounds, Microgaming’s Huangdi The Yellow Emperor excels with flying colors. The first of the special icons that the game has is the wild. This wild comes in the form of the logo of the game. This wild would replace all icons except the golden dragon. Speaking of the scatter golden dragon, it hands out generous scattered rewards. In addition, 3 of these icons at least would activate the game’s free games feature.