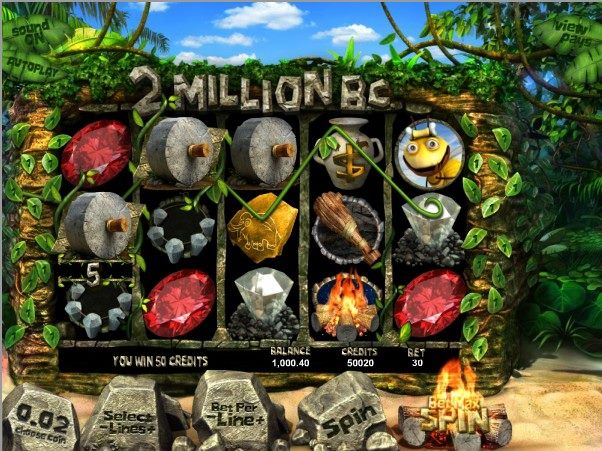 2 Million BC takes players on a pre historic adventure back in time, two million BC. It is a five reel slot game with 30 paylines. It is developed and designed by Betsoft Gaming. The wagering range varies between one and 150 credit which appeals for a wide range of online gamblers. 3D graphics, amazingly crafted symbols and vivid audio effects that will make you feel that you have traveled back through time for real.

2 Million BC is a very interesting pre historic themed video slot machine that is developed by Betsoft Gaming. This game will take players on a wild adventure back in time to the stone ages as they accompany a man from that age on a wild and a lucrative adventure. Players will get into that theme through the amazing design of the game as the entire game, not only the symbols, are themed around that time era. This includes symbols, the reels design, the background and the wagering area. Players will also see a caveman man standing at the right side of the screen as he celebrates with players and interacts with their winning combinations and game play.

The game is themed around the stone ages when men lived in caves and ate raw meat. This game brings players that exciting theme in wonderful graphics, amazing background music and plenty of rewarding bonus symbols and features that players will surely enjoy. The game itself is located in the jungle, as players will see leaves and tree branches surrounding the reels, players will also see a caveman who is standing right beside the reels on the right side. As for the 3D symbols that appear on the game’s 5 reels and 30 lines, they are also inspired by that time era. They include the caveman, a cave woman, cave drawings, a pot that has a dollar sign on it, a club, an ant, a diamond, a tiger, camp fire, and Stonehenge rock formation. Some of these symbols will become animated 3D symbols when they participate in the formation of a winning comb of symbols on an activated payline.

Right under the reels, players will find the control panel that is presented to players in the form of stones that players will click on in order to place wagers, choose lines, choose bet per lines and spin the game’s reels.

The game’s wagering range varies between 0.02 credits and 150 credits. Players will have to choose a number of lines they wish to wager on, a bet per line and a coin value that they want to use to place these wagers. All of this creates the wager that players will place before they can start spinning the reels of the video slot.

Since the game is Betsoft powered, players can expect to find plenty of rewarding features and bonus symbols. Players can find out more about these bonuses and special features alongside the normal line payouts by viewing the game’s paytable. The scatter symbol is the campfire and three of these symbols can activate the free spins round for lucky players. There is a bonus round called The Saber attack and this round is activated when players get three “nut” symbols on the reels.