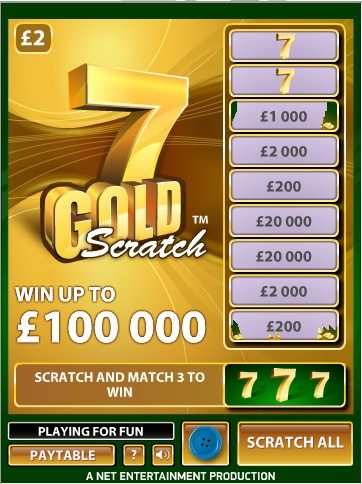 7 Gold Scratch is a very entertaining and a lucrative scratch ticket game. In this game, players as usual, will have to get three matching money amounts. Each ticket costs players £2 and they can win up to £100,000. The unique feature is that each ticket has a special money prize for players who get three golden 7 signs. This way, players have two chances of winning.

Scratch card games are dedicated to players who looking for a pure game of luck. This is because these scratch card games do not involve any kind of skill or thinking, it is a game of pure luck. Players purchase a card and they start scratching it in order to get specific or matching symbols so they can be rewarded. The symbols and the scratching method differ from one game to another. All of the scratch games are the same at heart but the difference is the theme, the concept and the layout of the game. Also, some games might offer players advanced features or more than one game in the same card. This game, 7 Gold Scratch is powered by Net Entertainment and players can find it at Mr. Green Casino among others. The game is themed around golden sevens.

At the bottom, players will find the control panel of the game. Players will find buttons that will allow them to buy a card, view the paytable, and pick the scratching tool. There are three different scratching tools that players can choose from. These tools are the button, the paper clip and a small red object.
The outlining of the game is green colored while the game is dominated by the golden color which fits the theme and the name of the game, 7 Gold. The players can know more about the payouts and their chances by clicking on the paytable button, which will open the paytable of the scratch card game so players can have a better look at their odds and their potential rewards that they can win at this game.

Under each rectangle, there is a money amount. This amount varies between 2 credits up to 100,000 credits. Players who are able to match three money amounts will be able to claim that money amount. This is not all as players will also find Golden sevens under these rectangles. The players who get three of these golden sevens will be able to claim a random prize. This prize can be scratched under the nine rectangles of the game. This is amazing because each card will cost each player 2 credits only.