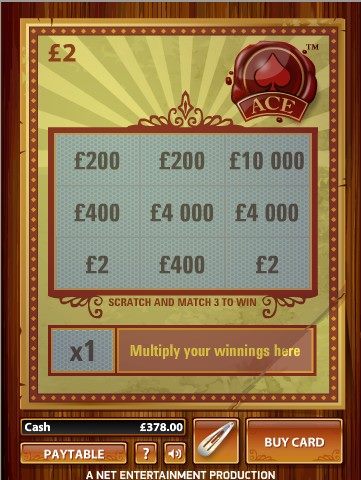 Ace is a usual scratch card game, it is developed by Net Ent. This game offers players the chance to scratch nine concealed squares by using one of three scratching tools. Players can also choose to scratch these tickets automatically. There is also a multiplier that players can scratch, this multiplier can double their winnings. Each ticket costs players £2.

Ace is a traditional scratch card game that is presented to players in a modern sense. The game is developed by Net Entertainment which has a great library of Scratch card games. The game is named Ace as players will see a Red Space Ace symbol at the top right, but the game is not themed around it. The game can be enjoyed with practice credits at this website or with real money at Mr. Green casino alongside other Net Ent powered casinos. The game has simple yet clear and superb graphics and it comes with a couple of features that makes the scratching fun and rewarding at the same time. It is a great game for players who want to test their luck and enjoy an exciting and a fun scratch card game.

The game will start after the players purchase a game ticket. They can do that by clicking on “Buy Game” that can be found at the bottom right corner of the screen of the game. After they buy the card, they will choose the scratching tool that they will use in order to scratch the card. There are 3 available tools, these tools are the black cloth button, a hair pin and a golden coin that has the Ace symbol on it. After they make that choice, they will start to scratch the big rectangle. They can scratch it manually or they can click on Reveal Card in order to automatically scratch the whole card. Scratching the big rectangle will reveal a 3 x 3 grid. Each square in this grid will have a money amount. The players who succeed in getting 3 similar money amounts will be able to claim that money amount.

After that, the players will start to scratch the smaller and thinner rectangle at the bottom, this rectangle will reveal a multiplier that will multiply the winning for the players. Players can claim up to 50,000 credits at the big rectangle. Each ticket will cost play two casino credits.