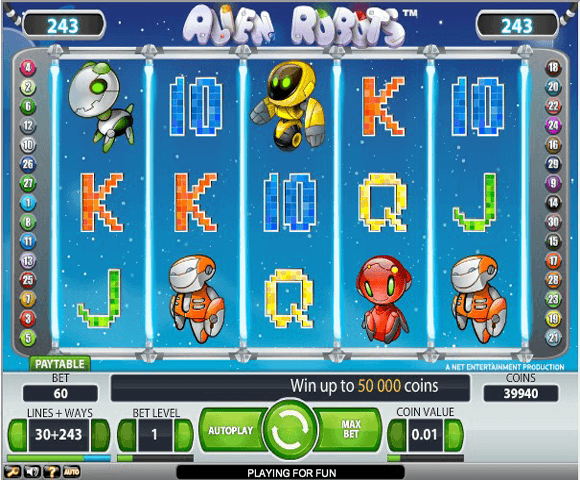 Alien Robots is a futuristic slot machine that is themed around Robots from outer space, hence the naming of the game “Alien Robots”. This game is presented to you by Net Entertainment. The game has thirty paylines and players can also choose to trigger the 243 ways to win mode which increases chances of winning for players. The game also has the expanding sticky wild feature and a scatter symbol which is the UFO.

Alien Robots is a futuristic themed video slot by Net Entertainment. The game is themed around robots from outer space, this is why the game is entitled Alien Robots. This is the reason why players will see a lot of robot icons on the symbols of the game. The design of the entire video slot and the soundtrack are all themed around aliens and outer space. All of the symbols and the visuals of the game are designed to fit the theme and they are all of high quality. This is not a surprise as the game is one of the games that are developed by Net Entertainment, also known as Net Ent. Net Ent is known for its quality games that offer players a visually satisfying gambling experience that is also rewarding. The game offers players plenty of bonus symbols and special features that would make players enjoy a rewarding experience.

The game has 5 reels and a total of 30 lines and 243 ways to win. This means that players will be given more than 300 chances of winning. Players can choose if they want to place on the lines only or activate the 243 ways to win feature. The 243 ways to win is much more rewarding than normal paylines since it gives players a better chance of achieving a win. The symbols appearing on the reels include different robots, a yellow robot, a pink robot, a red robot, a dog robot, a space ship and card symbols. The card symbols includes the 5 highest cards in poker, they are Aces, Jacks, Queens, Kings and Tens. Under the robot themed symbols, players will find the control panel of the game, it is where players will go through the different options in order to place their desired wager per spin on the video slot.

As mentioned, right under the reels, players will find the different wagering options. They will first choose the number of lines they want to activate as well as activating the 243 ways to win feature. Players will also choose the bet per line that they want to place as there are 5 bet per line available. Players will also choose the value of the coin that they will use to place their stake. The available sizes start at 0.10 and end with 0.50. All of these options create the betting range of the game which lies between 0.01 and 75 credits for each single spin. Players who want to activate the 243 ways to win will double their bet, which makes the maximum bet equal 150.

Special features and bonuses is what this game is all about. Players can find out about them at the paytable of the game. They will see that the game offers a scatter symbol, which is the space ship. It can trigger the free spins bonus round. The game also has a wild robot, which can substitute other symbols, and during free spins, it turns into a sticky wild.