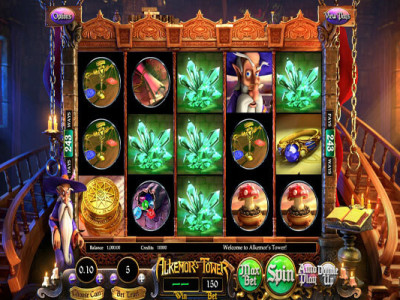 Alkemors Tower is a five reeled pokie that comes with 3D visuals and symbol, which is what players can expect from a Betsoft Gaming powered game. The game has a magical theme, which is obvious from the moment players open the game and see the visuals and the magical potions that will appear scattered across the reels and the lines.

As one can expect from a Betsoft Gaming powered game, the slot is fun, and offers an exciting gaming experience that is offered in exquisite 3D symbols and visuals and a lot of animations. All of this makes Betsoft Gaming 3D slots highly popular among players from around the world.

Alkemors Tower is a 5 reeled Betsoft Game that is the absolute newest game to be released by the Gaming developer. The theme of the game is also pretty unique and exciting as it invites players to enjoy the company of a Wizard in his magical tower. They will certainly enjoy the magical spells and the magical symbols, as well as the 3D visual experience that is a trademark for Betsoft Games.
On top of all of that, there is no denying that payouts is the most important aspect of any game, and when it comes to that, Alkemor’s Tower will excel with flying colors. This is because of the 243 ways to win format of the game, the highly paying symbols and the multiple bonus features and special icons that the game hosts.

Alkemor’s Tower has a 243 ways to win format, which offers much more payouts than the regular line based formats. These ways to win are spread across the 5 reels of the game. Across these lines and reels, players will see plenty of Magic and Wizardry themed symbols, which is not a surprise since the game takes players on a wild adventure that takes them into Alkemor’s Tower, which belongs to a great Wizard.

These symbols include the four elemental spell potions, multiple spell books, magical mushrooms, a scale, precious stones, green diamonds, Alkemor the wizard, golden coin, a magical ring and much more. Alkemor the wizard will not only appear as a symbol, as the wizard himself is going to join players during the game play as they will see him flying in the air on the left side of the reels.

The game has 243 ways to win, and this is why it has two betting variables only, the coin value and the number of used coins. This results in a betting range that varies between 0.06 and 150 credits for each symbol.

The game has multiple special symbols and features. For starters, there is the Vine symbol. When it lands on the 3rd reel, it will start to devour the symbols near to it, giving players great rewards for each symbol. There is also the black hole symbol that can do that when it lands on the 4th and the 5th reels.