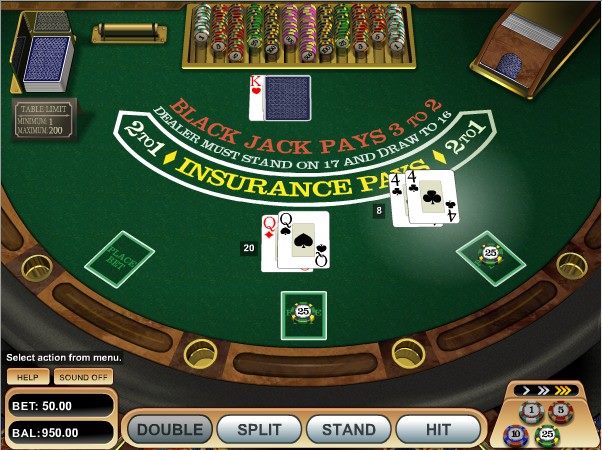 American Blackjack is dedicated to beginners and new Blackjack players. This game is played with six different decks of cards. Players play face to face with the dealer, as there are no other players involved, it is just one player and the dealer. The betting coins include one, five, twenty-five, fifty and one-hundred dollars. This game by Betsfot also allows the dealer to give you hints on what to do.

American Blackjack is one of the many blackjack variants that are developed by the leading name in the industry, Betsoft Gaming. This game is played with 6 different decks of cards and it follows the American rules of Blackjack. This game also appeals to beginners as it gives players hints during the game play on what they should do according to their cards and the cards of the dealer. The game has the same purpose as any Blackjack game which is getting a hand total that is equal 21 or closer to 21 than the dealer without busting (going over) that number. The players will be faced with several options during the game play including placing an insurance, splitting, doubling, hitting or standing.

This blackjack game is also a multi hand blackjack game which enables players to play with three hands against the one hand of the dealer, each hand has its own wager. This gives players more than one chance to win.

Players will begin the game by placing wagers that varies between 1 and 200 as mentioned above. They will do that by choosing chips and placing them on the hands that they want to activate and play with. After they place the wagers, they will start the game by clicking on deal. They will get two cards on each activated hand while the dealer will get 2 cards. The cards of the players are facing up while the dealer is going to have 1 card facing up while the other 1 is going to be facing down.

The players will then start to play with each hand and decide whether they want to hit to get more cards or stand if they are satisfied with the hand total. They can also split if they have identical cards to place insurance.

After doing that with all of the activated hands, the dealer then will view his hole card and he himself will start to ask for more cards or stand. The dealer is obligated to stand at a hand total of 17. Then the showdown will begin and each hand of the players will be compared with the dealer’s hand.