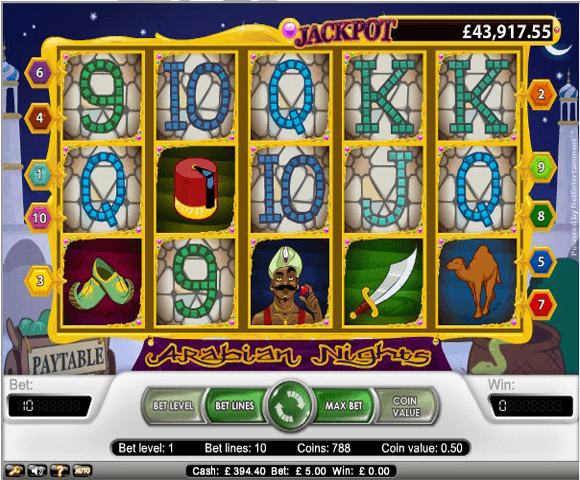 Arabian Nights is a five reeled video slot machine that is themed around The Arabian culture. The game has a set of exciting features. For example, the game has a progressive jackpot, free spin rounds, a wild multiplier symbol and a scatter symbol. The wild symbol of the game is the Arabic Man who acts as a multiplier and also acts as a jackpot symbol. Players who get five of this symbol will trigger the jackpot if they have placed the maximum bet.

Arabian Nights is an Arabian themed game for all of the Arabian nights’ lovers out there. Players who are looking forward to enjoy an authentic Arabian experience will be glad to know that this is exactly what this game plans to provide. The game creates an Arabian world through every aspect of the video slot. This includes the symbols, the design and the background music and sounds.

Players will see the game’s control panel under the spinning reels and it contains all of the different option that will enable them to control the different aspects of the game. This includes the wagering option and spinning the reels among other options.

Players will find the only option that will help them determine their wagers at the bottom of the game’s screen, right underneath the slot’s reels. This option is the number of lines that players want to wager on. This is because the bet per line is fixed at 1 while the coin value is fixed at 0.50. This is why the wagering range is not that varied because of the lack of options. The minimum wager is equal 0.5 and the maximum wager is equal 5 credits per spin.

The video slot’s scatter symbol is the magical lamp and this symbol rewards players with instant scattered payouts as well as triggering the free spins round where players can earn up to fifteen free spins on the video slot machine. As for the wild icon, it is the Arabian man holding a ring. It can substitute for any other symbol on the video slot’s reels except the bonus symbols.