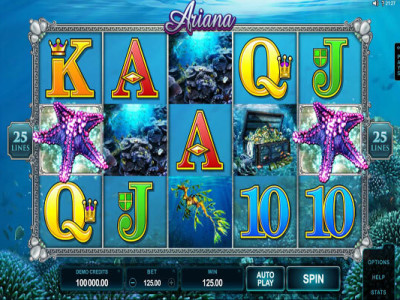 Ariana, the Mermaids Queen of the underworld kingdom that is ruled by none other than Poseidon, and from the premise of the game, it seems that Poseidon left Ariana in charge of the seas and the oceans of this world. Ariana invites players to join her in a one of a kind gaming experience that is unlike any other pokie out there. A game that comes with plenty of winning chances, amazing visuals and captivating sound effects, plus a long list of special features and bonuses for players to take advantage of during the game play. Ariana is also one of the newest games by Microgaming that comes in the most advanced game play features.

Ariana is a 5 reeled pokie machine that is fun, rewarding and has a lot to offer to players in terms of fun, rewards and an overall amazing experience that will always have them coming back for more. So get ready to enjoy this free pokie here with demo credits, as we always offer the newest games, especial y by Microgaming, so players can test them out and check their features before they can start placing real bets at casinos like “Jackpot Paradise” and Spin Palace Casino. Try the game, and understand what it is all about right here through this review and be the judge.

The game takes place underwater as players join the Queen Ariana the Mermaids who rules the underwater kingdom of her father, Poseidon. Players will not only join the Queen for a fun packed and a bonus filled gaming adventure, as they will also enjoy the great theme and the visuals that would provide them with an immersive ride. This is not really a surprise since the game is powered by Microgaming which is well known for its high quality games that are always on the top of the charts.
Due to the theme of the game, the visuals are all inspired by the underwater world as they include Ariana the mermaid, sunken treasure chests, a star fish and poker card icons. These symbols would appear to players spinning on the 5 reels of the game and the 25 bet lines that the game hosts.

The game has 25 fixed paylines (they are all active during any spin), but it has 2 variable wagering options that create the betting range of the game. Players will place up to 10 coins per bet line, with a coin value that can amount up to 0.50. So in total, players will place from 0.25 up to 125 credits for each spin.

Ariana has a wild icon, which is none other than the Ariana logo. This wild icon would replace all other icons , except the scatter starfish. This scatter starfish can trigger scattered pays, plus activating the free spins of the pokie when players get 3 or more starfish symbols. The wild logo can also appear stacked during the base game or the free spins round.