Attack of the Zombies 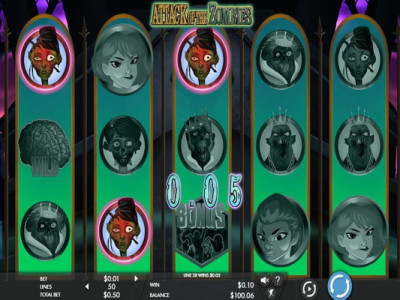 Attack of the Zombies Pokie

Attack of the Zombies is a brand new pokie title that was announced recently by Genesis Gaming. The game has gone live at most online casinos that are powered by Genesis Games. The game is already a great hit because of its rewarding nature, and its immersive ride. The best part is that the pokie can be tired out here for fun with demo credits. This way, players can check out what the game has to offer prior to placing real money bets on the game.

Attack of the Zombies is a Genesis Gaming pokie machine that comes with a scary and a terrifying theme. As apparent from the title that was chosen by the developer, the game has a zombie apocalypse theme. This theme is presented in wonderful visuals which captivate the players from the start. The pokie also comes packing a tremendous amount of winning chances, bonuses and features. This guarantees players a ride that is not only fun and exciting, but a lucrative one as well. All of this does not come as a shock to anyone in the gaming industry, as the game is from the marvelous portfolio of Genesis Gaming.

The pokie machine has a unique theme, which is about the zombie apocalypse. The zombies apolcaypse is not the unique part, the time era is. Unlike most pokies that take players to a modern day zombie apocalypse, this pokie takes players to Victorian England during a zombie outbreak.

The game invites the players to join 4 huntresses who are out to hunt the zombies who are wreaking havoc in London during the Victorian age. These huntresses roam the haunted cemetery that is the source of the zombie outbreak. This is why players will see that the reels are located in that cemetery. They would also see many zombies as symbols across the reels and 50 lines of the game. So get ready to claim a lot of fortunes through these lines, as well as with the help of the game’s special icons and features.

Attack of the Zombies, being a Genesis pokie, comes hosting multiple winning chances and features. The first of them is the wild brain that the zombies are after. This wild substitution brain will help players get paid by forming a winning combo. It will replace the icon that is going to trigger the biggest payout. The wild can’t replace the bonus symbol.

This bonus symbol can give scattered rewards, as well as trigger the free spins round. This happens when players get at least three of them on the reels. The bonus round is called the Antidote Free Spins. This is because all 4 huntresses will become zombies and players will collect antidote symbols to help cure them. When that happens, the free spins round will come to an end.