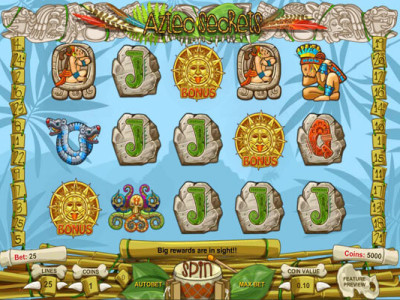 Aztec Secrets is a 1×2 Gaming powered pokie that is truly remarkable. The game, which is apparent from its title, is all about the Aztec civilization, its secrets and its fortunes. This is why the game takes players back in time to the Aztec civilization where they can explore its secrets, unveil them and claim all of their fortunes as their own. They will do that by simply placing a bet and spinning the reels of the game so they can start the adventure while racking up on the great rewards that the pokie has.

The game is powered by 1×2 Gaming, this is why players can predict a fun experience that is immersive and engaging through its visuals and sounds. So whenever players spin the reels of the game, they will enjoy a truly one of a kind gaming experience like none other.

The theme of the game is quite obvious, whether from the title that 1×2 Gaming picked for the game, or from the visuals and symbols that players will see as the game loads. This is why the game is going to provide players with a one of a kind experience whenever they decide to spin the reels of this game. The game is powered by 1×2 Gaming, so apart from the immersive experience, players are guaranteed a game that is visually satisfying as each symbol is designed with attention to details to fit the theme of the game and help players enjoy the game even more. Not only the symbols, as even the interface of the game, the control panel and its buttons are inspired by the Aztec jungle civilization.

The game is offered in 5 reels that give players a total of 25 lines that they can place bets on. The symbols that are going to land on the reels of the game include a snake, an Aztec mask, a golden mask, ritual mask, stones, Aztec glyphs and symbols as well as card icons that are engraved in Mayan stones.

The game’s wagering range begins with 0.01 credits per spin, and ends with 62.50 per spin. The betting range is a result of the three wagering variables that Aztec Secrets host under the reels as a part of the control panel. They are the coin value, the number of lies and amount of coins players wish to place.

Since it is a 1×2 Gaming pokie, players can expect to find plenty of bonus features and rewarding symbols. For example, there is the wild icon, which is represented by the golden colorful mask. It would substitute for other icons with the exception of the other 2 special icons.
The other 2 special icons are the Sun Bonus Mask that can trigger the bonus round and give multiple rewards. Lastly, there is the Aztec mask that can trigger the free spins round of the pokie.