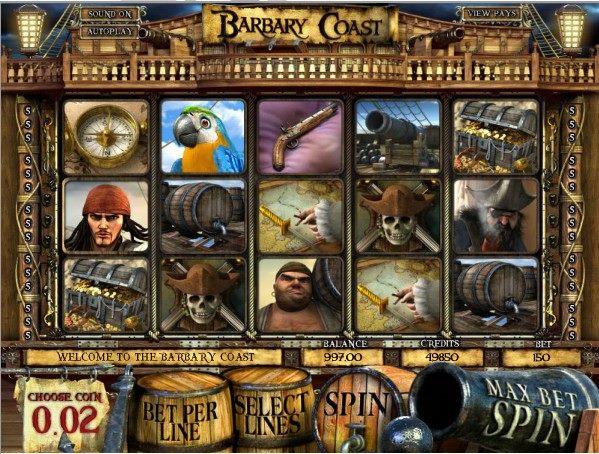 Barbary Coast is a Betsoft Game that can be found at Mr. Green casino. A five-reeled game with thirty paylines that is themed around the world of pirates. Players can except to see symbols that are inspired by this world. One of its most rewarding and unique features is The Fight Bonus where players get into a sword duel with the Captain in order to save a beautiful woman. It is a game for low rollers as the betting rage varies between 0.05 USD and one USD.

Barbary Coast is a fantastic video slot machine that is dedicated to all of the fans of pirate movies and games. So if you enjoyed Pirates of the Caribbean, you are surely going to enjoy this pirate themed game. This game is powered by Betsoft Gaming, it is a 3D video slot which means that players will be immersed into this game through the wonderful graphics and the outstanding 3D symbols and layout that the game provides. Players will also be immersed into the theme through the soundtrack and the background music that the game provides to its players. Once players open the game, they will quickly notice the theme as it clearly dominates the entire layout and interface of the game. This includes the control panel, the symbols and the design. Pirate fans can give the game a couple of spins here for free or they can go to the nearest Betsoft Gaming powered casino to place real money on the game. One of the best Betsoft casinos is, without a doubt, Mr. Green. The game is also packed with plenty of bonus features and special bonuses that would make this experience as rewarding as it is entertaining and fun.

Players will be drawn into the pirate theme of the game from the moment they open the game and listen to the music in the background and they will be further lured into the theme after it loads and after they see the amazing design and the symbols on the game’s reels. The game has a simple setup of 5 reels and 30 lines. Across these lines and reels, players will see several symbols including a parrot, a pirate, a pirate gun, a compass, a map, a treasure chest, a canon, a henchman, golden coins and a beautiful lady

Not only the symbols, as players will see pirate inspired buttons at the control panel of the game that is found under the reels. For instance, the max spin button comes in the form of cannon that will move and get back to its place when players click on it. The other buttons in the control panel come in the shape of gun powder barrels.

Choosing a number of lines is not the only option for wagering as players will also choose a coin value (0.05 – 1) as well as a bet per line. This means that players can place bets that vary between 0.05 and 150.