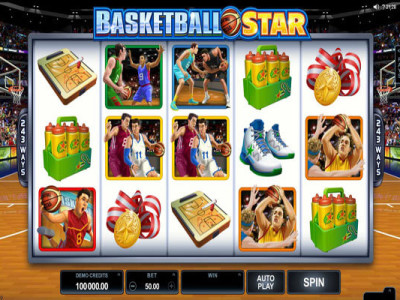 Microgaming is a well accredited gaming developer that is one of the oldest developers in the industry. It has managed to create a name for itself, and it is well known for releasing new games every month that come with exciting themes and great rewards. The newest game to be added to its gaming portfolio is this game, Basketball Star. The name might sound familiar to veteran online casino players, this is because there are two other games that are themed around sports and have the same name format like Rugby Star and Football Star. So it seems that this game is the 3rd addition to the Sports Start “unofficial” gaming series.

This is why players who enjoyed Rugby and Football Star will quickly notice that this game has almost the same features, gaming format and visual style. So if you are a basketball fan, then this game is the right one for you, and you should certainly try it.

Welcome to the world of Basketball, this is what people at Microgaming must have been thinking when they created this game. This is because this pokie is all about this popular and exciting sport and players are invited to enter that world through this pokie. The game follows the same setup and payout system of other sport themed pokies that were released before like Football Star and Rugby Star. The game is quite entertaining, thanks to its theme and visual quality, and it is also pretty rewarding because of its 243 ways to win, as well as its special features and symbols that can be very lucrative to lucky players. Give the game a try right here for free before placing real money bets on the pokie and you will not regret it.

The game’s symbols include the logo of the game, a basketball, a basketball court, multiple basketball players on the court, the cup and more.
The Wagering Range

The game’s betting range varies between 0.50 and 50, as a result of the 2 betting variables, the number of coins and the value of these coins.

The log of the game is the wild symbol, which means that it can replace other none special icons anywhere on the reels of the game in order to aid players in forming a payout. The wild icon can also appear stacked on certain reels, and the random wild feature can be triggered at any time turning reels into wild ones.

The other special icon is the scatter basketball, which can trigger the free spins round of the game when players manage to get 3 of them anywhere no the game’s screen.