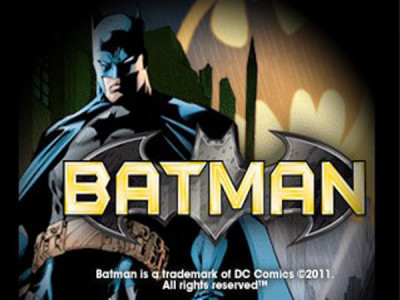 The Batman Slot Machine is a DC-licensed (for those who don’t know: DC is the company that makes Batman comics) slot game featuring the caped hero who uses the symbol of the bat as his costume to fight crime that is spreading around the city of Gotham. In this slot game, you, as Batman, will have to save Gotham City from the evilness of the Joker. With the help of Commissioner Gordon, it’s your job to kick Joker’s and his goon’s butts to jail. How will you do that? By winning bets in the game of course! No need to whip out the Bat mobile or fight crime like the Batman does. Just win the games at the slots and you’ve got the Joker right where you want him.

Batman Slot Machine plays like all the other slot games but it has some features that are somewhat unique from other slot games. This game has multipliers, scatter symbols, wild symbols and a bonus game so you can breathe with ease because this game is on your side. It also has a whopping 50 paylines so there’s a chance you’ll be winning more than you bet.

The symbols in the game are top-notch. From the Batman himself to Commissioner Gordon to the Batman equipment and The Joker, you’ll love all the symbols that are featured from the Batman comics and movies. You’ll love the way they were drawn and illustrated. Since it is licensed by DC Comics, it’s only natural to see these things used for the slot game. Any fan will appreciate the fan service in this slot game. And it isn’t just the graphics that make it worthwhile; even the sound effects of those familiar Bat mobile sounds and other sounds that make it Batman will surely give you the thrills. This makes for the authentic Batman experience. And come on! Who wouldn’t love to hear the music? From the heroic music of Batman to the villainous music that comes in later, it will take you into a whole different world.

One of the best features of the Batman slot machine is how it implements some of the features taken from other slot machines. When you get at least the required number of scatter symbols (for those who don’t know, scatter symbols will always net you winnings even if they don’t align along a row or payline. Just as long as they appear in your reel) you’ll unlock a bonus round. In this bonus round, you’ll fight Joker and his minions. This is your chance to shine in the dark, nightly Gotham City. But really now, saving the people with a slot game? Very un-Batman but hey, if you must save the people, then you’d better take whatever chance you can get and save them before the Joker turns the city into his own circus.

Yet another great feature is the Wild Symbol. Like all other slot games that feature this symbol, you can use this to substitute for any symbol needed to make the alignment on rows or paylines. If you’re that close to the jackpot, then you’ll be saved with this Wild Symbol.

Paylines are also a great feature to this game. The slot mentioned features, as mentioned previous, 50 paylines so it gives you great winnings even if you bet small. For the more adventurous, you can also go for the bonus bet which will let you try out a combo of 60 bets to net you more winnings. This game truly rewards the risk-seekers.

Overall, Batman Slot Machine is a winner. With its great features (from the 50 paylines to the bonus rounds and symbols), its homage to the Batman franchise and solid gameplay, you’ll be delighted to become the caped crusader himself as he battles the funny-looking clown in a fight to save Gotham City. Go get them Batman!