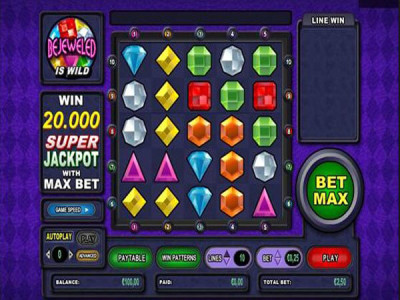 Puzzle games like Free Slots Bejewled are quite an addiction for some people. Similar games like Tetris give people a simple goal: just fill up a row and they all just disappear. Other puzzle games follow that principle but they make into a more unique goal: align at least 3 or 4 symbols colors and then they disappear. This is what is followed by Bejweled, a popular puzzle game. The game goes like this: you’ll be shown a bunch of symbols like diamonds and rubies. Your job is to align the same color and shape to let them disappear and make a score. When they disappear, new symbols appear from above and now your box (which the symbols appear in) is filled up once more. This has become a hit with many gamers because of its easiness and addictive-ness. Because of this, the developers Cryptologic decided to turn this hit puzzle game into a hit slot game.

The Bejeweled Slot Machine plays like the original Bejeweled. In fact, if you happen to be a big fan of this puzzle game, you’ll be delighted to know the slot game stays true to the design. It has been adjusted to accommodate the design structure of ordinary slot games. This game happens to be a 5 reel game so instead of the usual 6-8 column from the original, it’s arranged 5 x 5. But other than that, everything about the design is here in the slot version.

How does this game play anyway? Obviously the feature to move gems has been removed because this makes winning the prize easier than other slot games (and it would be a cheat you know). But how does it really play? Instead of “spinning” the reel, you’ll “drop” the reel. Since the original had jewels drop from above, this slot version does the same as well. After the drop, if 3 or more symbols align either in a column or row, you win a prize. This is one of the differences from Bejeweled and other slot machines: the paylines have been arranged vertically and horizontally. There are only 10 paylines but don’t worry; the winnings you get with your bet will be worth getting so make use of those good bets.

As you play Bejeweled, you have access to some of the rules to the game. If you’re confused about what the paylines are and what should you do, you can just hit the Help button and get a refreshment on the rules. You can even see some of the winning patterns of the game. You can see what you win if you hit certain patterns, what you win if you hit the bet max and so on.

Bejeweled lets you win a jackpot of 20,000 coins which will definitely net you a lot to make more bets as you go along. And the maximum jackpot for cash? $400,000. Yes, that’s right. You’ll be eligible for this kind of jackpot in the game so if you got what it takes to get that jackpot, better play it right.

Despite the goodness that Bejeweled brings to the table, you’ll be a bit disappointed to know that the Bejeweled Slot Machine only has one bonus feature and that is the Wild Symbol. The Wild Symbol is a random shape that can substitute for any shape or color when you need to align with a set of symbols that need one more gem or shape to get it to score you some good coins. You can use it vertically or horizontally like all the other symbols and shapes so if you need just one shape to get you a jackpot, you can use this feature.

After all that, there’s nothing much to the Bejeweled Slot Machine. Even with the Wild Symbol attached, there’s nothing you can get out of the slot machine. All you’ll be doing is trying to win the jackpot by using the paylines and the wild symbol.

But even if the Bejeweled slot machine doesn’t have that many features, it’s still a great game. Cryptologic exercised great effort in bringing the popular puzzle game into the slot game world and it shows. The design, the mechanics, the structure and everything else makes it feel like the original. Even the way the slot game plays will really make you feel like you’re playing the original minus the “moving the gem” of course. So if you’re a fan of the original or if you want a different kind of slot game experience, why not give the Bejeweled Slot Game a try? There’s nothing aligning a few gems here and there to win yourself some coins and cash.