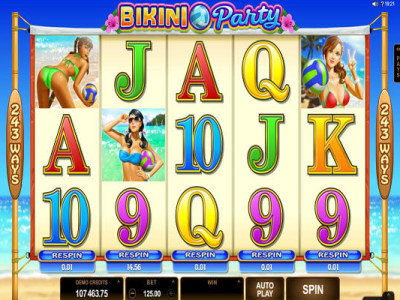 Bikini Party is a 5 reeled pokie game that is powered by Microgaming. It is one of the two new games that were released by the gaming developer in February. The second game is Dragon Dance, although the two pokies have different themes, they do come with similar features and game play options. The game has immersive visuals that will entertain players, through which it delivers a fun, an exciting and an engaging gaming experience that is like none other. So get ready for a calming experience that you will never have enough of. Try out the game here for free with demo credits before playing it with real cash.

Bikini Party by Microgaming presents players with a highly lucrative and an entertaining experience that takes them to the beach for a calming experience. The game has a 5 reeled format that boasts 243 ways to win and it hosts plenty of special features and symbols for players to take advantage of during the game play. Since the game is powered by Microgaming, players can expect to find an immersive gaming experience that is presented in amazing visuals with engaging audio effects.

Bikini Party by Microgaming is the brand new slot to be added to the already rich and varied gaming portfolio of the developer. The game has a 5 reeled setup that hosts 243 different ways to win, which is a pretty rewarding format that gives players many winning chances whenever they give the game a few spins. As the title of the game implies, the game is going to take players to the beach where they will get to enjoy watching a sexy group of female volley players battling it out on the beach. This is why the 5 reels of the game are located on the beach, right on the net of the volleyball game. Players will also see the blue skies, the clear water and the white smooth sand in the backdrop of the reels.
As for the symbols, they include the different sexy volleyball players in hot bikinis, the volleyball, the logo of the game and poker card symbols.

The game’s betting range is between 0.25 and 125 credits. This wide betting range appeals to a wide number of players, whether low rollers or risk-taking high rollers.

The game’s logo “Bikini Party” is the wild icon of the game which gives players more chances of triggering a payout by substituting for other symbols, except the scatter volleyball. This wild will only appear for players on the 2nd as well as the 4th reel.

The game’s scatter icon is the volleyball. This volley ball would give players plenty of scattered rewards, plus activating the free games feature of the game which gives 15 spins with tripled payouts. There is also the Re Spin feature that would help players earn prizes, but with a cost.