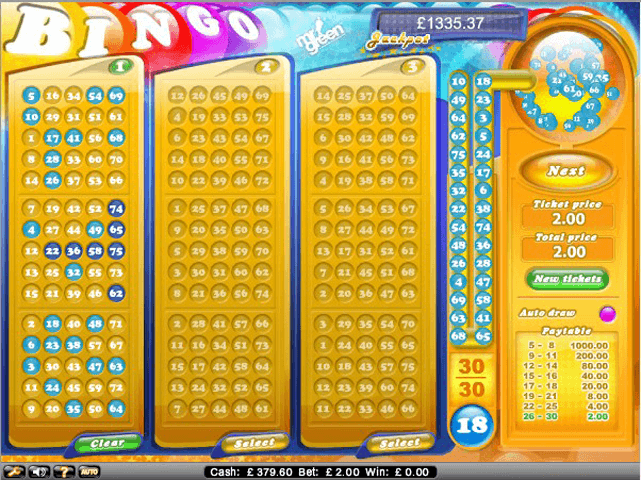 Bingo is a Net Ent developed game that can be found at online casinos such as Mr. Green Casino. In this game, players can purchase up to nine Bingo tickets. Then a draw will take place just like the normal Bingo game. Players can go with the draw or finish it instantly by clicking finish draw. Players will be paid for each row that they achieve. This is an amazing fast paced game that is dedicated to bingo player who do not want to sit for long and boring bingo games.

Bingo is one of the most commonly played social games in the world. This is why online casinos and software developers decided to capitalize on its popularity by transforming it into an online casino game that can be enjoyed at casinos. The online version of bingo games enables users to enjoy a quick and a simple game of bingo without having to go and spend hours in boring bingo halls. This is because there are no other players involved at the bingo games at the online casinos. In these games, players will buy one ticket or more than one ticket and a bingo machine will start pumping out bingo balls and the matching numbers will be marked on the tickets and players will then be rewarded according to the paytable, which is much different from the usual and traditional land based bingo game.

Of course, since the game is from the gaming portfolio of Net entertainment, the players can expect to see wonderful graphics and really entertaining audio effects accompanied by a very smooth game play.