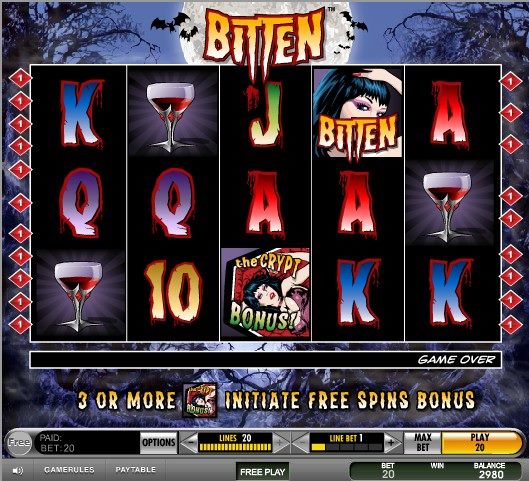 Bitten is one of the best video slot machines on the market. It has 20 paylines and five reels. This game allows you to get deep into the mysterious and thrilling world of vampires and their fortune. You can access these fortunes through regular winning combination or through the wild symbols that can multiply your bet with a maximum multiplier of 250x. Besides multiplying the payout, they offers scatter payouts as well.

If you are a fan of vampires, then Bitten video slot is the game for you. This game is developed by IGT and it invites players to go into the mysterious and the dangerous world of the vampires. Starting from the name to the features of the game, they are all inspired by vampires. This includes the game’s spinning symbols, the design of the game, the background and even the soundtrack at the background. So if you want to be a part of the immortal world of the vampires and try the game for free, you can do that right here. On the other hand, if you are looking forward to gamble real money to earn real money, you can do that at any of the casinos that have the power of IGT behind them such as Mr. Green Casino. The game is also packed with a set of rewarding features that will make your experience worthwhile.

As mentioned, the video slot has a vampire theme to it, which is clear from the name of the game, Bitten. As soon as players open the video slot, while the game is loading, they are going to see a stunningly beautiful and a pale female vampire in a red dress. Then after the game loads, players will be stunned with the beautifully design reels and symbols that are spread across the game’s paylines. These symbols are all themed around vampires.

The game is presented to players in five spinning but non progressive reels and 20 lines. This means that online players will have 20 different chances of achieving a line payout. Under the 5 reels and the 20 lines of the video slot, players will find the wagering area and control panel of the game. This is where players will control the game’s settings, specify their wagers, spin the reels and view the paytable of the game. This paytable will enable online players to know all about the bonus symbols and special features that the game holds as well as the normal line payouts that they can earn.

The game’s wagering range is specified by two things, the bet per line that players wish to place on the lines they activated and the second thing is the number of lines that they wish to activate. Players can go through these options at the control panel that is located under the game’s reels.

The game’s wild symbol is the Bitten logo which can substitute for any other symbol as well as multiplying the winnings of any combination that the wild symbol is a part of. It can also trigger the jackpot of the game, the highest win. This happens when players get 5 of these symbols on the reels. They will be rewarded with a win that is 250x their bet. The game also has another bonus round that is called the Crypt Bonus Round that is triggered by the Crypt bonus symbol. 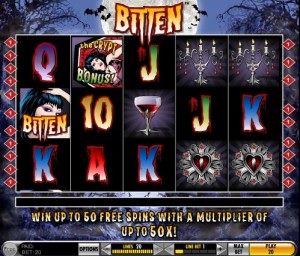 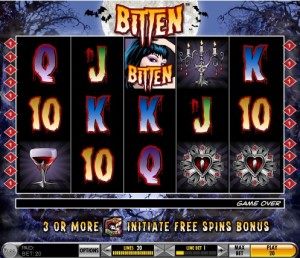