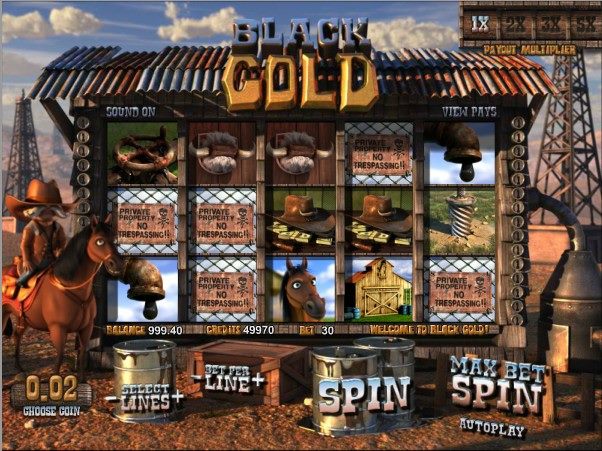 Black Gold is a 5-reeled slot machine with thirty paylines from Betsoft Gaming. The presentation of the game is perfect, just like any other Betsoft game. Black Oil is the term used to describe Oil. This is why the game has a lot of symbols that are inspired by the oil industry such as oil rigs. The games offers various bonuses and rewarding features. The wagering range varies between 0.01 USD to 75 USD.

Black Gold is oil, it is called that because it has a high value like gold and it has a black color. Many people in southern Texas and the south of the USA have gotten rich off this oil since the southern land are rich with the black gold, oil. Players will be able to enjoy that theme as they go extract oil in this wonderfully designed game. Players will be able to earn great rewards and become rich, just like the oil extractors through the rewarding features and the bonus symbols that the game offers. The game has a southern theme to it since players will notice a lot of symbols that are inspired from the south including Texas.

Black Oil is a 3D Betsoft Gaming powered video slot which means that players will enjoy 3D graphics of high quality as well as intriguing sound effects. It also means that players will get immersed fully into the game’s theme since Betsoft knows how to do that. They will be immersed through the sounds, the design of the game and the 3D symbols that appear on the reels.

From the moment players open the game and watch the intro, they will know that the game is themed around oil and oil extraction. As the game loads, they will see that the reels are located in the desert with oil related symbols on the reels. Even the control panel that is found right under the reels are designed in a way to be fitting to the theme as they come in the shape of oil barrels and crates. Players will also see a Texan businessman on his horse on the left side of the game’s reels.

The symbols that appear on the game’s 30 lines and 5 reels are 3D and they include a horse, a Texan businessman, an oil refinery, a no trespassing sign, stacks of money, a farm house and other symbols. These symbols will become animated when they participate in creating a winning combination of symbols on a line that players have activated.

The game has thirty lines that players can place wagers on but that is not the only wagering option that players will have to determine so they can place a wager. Other wagering options include a coin value. The smallest value is equal 0.02 while the biggest value is equal 0.50. Players will also choose a bet per line. This means that the game’s betting range is between 0.02 and 150.

Players who get a minimum of three farmhouse symbols will trigger the free spins round, this bonus round is called NightTime free Spins. Players who get 3 drill symbols on the reels will activate the Drilling for Oil Click Me Bonus where they will click on items to get instant cash rewards. 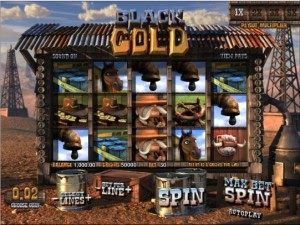