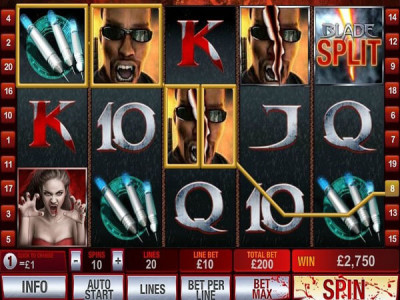 When you hear the word “Blade”, what kind of image comes to mind: (a) a kitchen blade, (b) a razor blade or (c) an undead, daytime vampire slayer who’s a vampire himself and goes about his days and nights kicking some butt having had his own movies and a long-running comic series in Marvel? If you answered letter c, then you’ve got it right! The legendary undead vampire who slays his own kind along with a slew of other creatures that harm humanity has come to make his debut in the world of slot machines. Get ready to play as him in the Blade Slot Machine.

The Blade Slot Machine is a hybrid slot machine since it’s got 5 reels and 9 paylines. Unlike other slot machines, it’s a progressive jackpot as well so you’ll no doubt see the jackpot grow and grow everytime someone plays it. If you manage to hit the jackpot, then rejoice gamer: you’ve become an instant millionaire.

So before you go dizzy with this craziness, what is Blade? Who is this dude? He’s a character conceived by the comic book writers from Marvel. He’s someone who was born when his mother got bitten by a vampire so he’s more or less immune to being a vampire through the bite (uh, because he’s immune?) but he can walk in the daylight like normal humans. Thanks to that incident with his mom, he’s also gained the powers of vampires. He’s the hybrid vampire; one who can lounge around the world day and night (and don’t even try to compare him to those vampire suckers in Twilight; they shine in the day!). Because of his hybrid-ness, he’s a vampire slayer and will anyone who disrupts the very peace of humanity. Well, how kind of a vampire who doesn’t like his own kind.

When you play the slot game, you’ll see symbols based from the comic books. So you’ll see crosses, vampire girls, graves, skulls and garlic (yup, who can forget the only weakness of those bite-sucking freaks?). This will surely give you a little creepy thrill if you’re into those kind of things.

The game features only 9 paylines but that isn’t necessarily a bad thing; it does give you a better chance at winning more winnings since the patterns are few and achievable. But take note though; there aren’t any multipliers so you’re not getting that much like other slot games which feature multipliers.

There some cool bonuses to trigger and get. There’s the wild symbol which shows Blade himself and as always he’ll substitute for any symbols to make the combo. Then there’s the free spins. If you get a certain set of symbols to appear in the reels, you’ll get 5 spins! That will surely make any gamer happy since that doesn’t occur much in other slot games. And during these 5 spins, you have a chance to rake in more winnings if you get a number of Blade symbols to appear. This is definitely a winner’s galore for everyone.

It was mentioned previously that the game has a progressive jackpot which is true. This means that as more and more people play, a percentage of their bets directly increases the jackpot so at any time, if someone gets the jackpot that is progressively growing, then they’ve become instant millionaires.

But don’t be sad if you don’t win one of them. “What? One of them?” That’s right gamer; there are THREE progressive jackpots in this game. So even if someone won a progressive jackpot, there’s two more to go. Now that should keep anyone satisfied to progress more to get their jackpot.

If you’re confused about playing the game, you can always consult the rules page which is easily through the bar below. You can see what the rules are and what are the patterns for the paylines if you don’t want to be shortchanged.
The design of the slot game is well-integrated. It pays tribute to the comic book style of the Blade series. Most people though Cryptologic (the developers) were going to use the Blade movies as a design basis but many were in relief the developers used the comics which is many ways the right decision to make.

Overall, the Blade Slot Machine is a great slot game. With its well-implemented design, solid slot gameplay and extravagant bonus features, this is your time to become vampire slayer Blade himself and save the world from utter disruption… through a slot game of crosses and garlic!