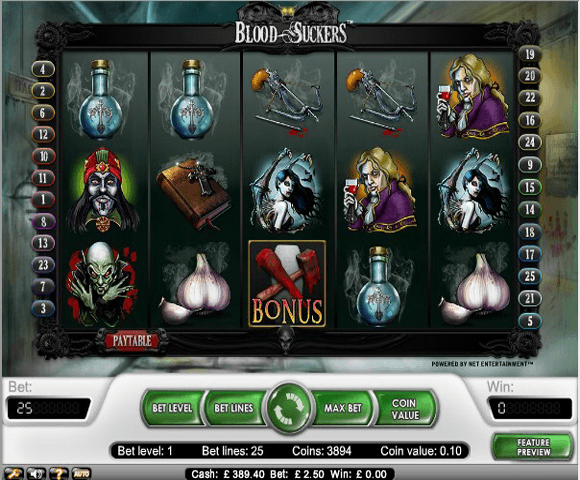 Blood Suckers is a five reeled slot machine with three rows and twenty-five paylines. The game is themed around vampires. This is why the symbols that appear on the reels are inspired by that theme. They include female vampires, male vampires, the holy book and crossbows along other symbols. The game also has numerous features such as a bonus game, a wild symbol, a scatter symbol and a very rewarding jackpot.

Blood Suckers is a vampire themed video slot machine by Net Wntertainment, which is quite obvious from the title of the game. It is themed around the dangerous, scary and thrilling world of vampires. This is why players who are looking forward to go deep into that mysterious world in search for great rewards and awesome riches should try the game. Players will be invested into the theme of the game due to its amazingly captivating graphics, awesome soundtrack and rewarding bonuses and features. All of this enables players to enjoy a thrilling vampire themed gambling experience with chances of hitting it big. The game can be enjoyed by players without any real money right here or they can go to any online casinos such as Mr. Green casino to place real money bets.

If you are a fan of Vampire movies such as Twilight and Underworld or TV series like vampire diaries or True blood, then this is the game that you should be playing. It is all about the blood sucking vampires and the world that they live in. It gives you a chance to enter that world to see what is it all about. The game creates that world and immerses you in it through the captivating visuals of the game and the scary and thrilling sound effects in the background. The symbols appearing on the reels are all themed around these blood suckers such as a female vampire, a bible, a cross, a male vampire, a skull, onions, a stake and a hammer, holy water potion and a vampire biting a female human among others. The design and the background of the reels have a dark theme to them, which adds to the theme of the game. Since the game is based around the dark and mysterious world of the bloodsuckers. The game is presented in 5 lines accompanied by 25 winning lines.

Under the reels, players will see a white control panel that has green buttons. These buttons include the spin button, max bet button, wagering options and other game settings. The wagering options include 3 buttons. There is the coin value button which players will click on in order to choose a coin value that ranges between 0.01 and 5. There is the bet level button which players will click on in order to determine their bet per line, there are 5 betting levels available at Blood Suckers. Lastly, the numbers of activated lines that players want to wager on. There are 25 lines available. All of this contributes in creating the wagering range of Bloodsuckers which varies between 0.01 & 500.

The wild symbol is the vampire that is biting a human female, it can replace any symbol in order to help create a winning combo, which increases the odds of players. The game also has a bonus symbol, this symbol is the stake and the hammer symbol, it can trigger the bonus round.