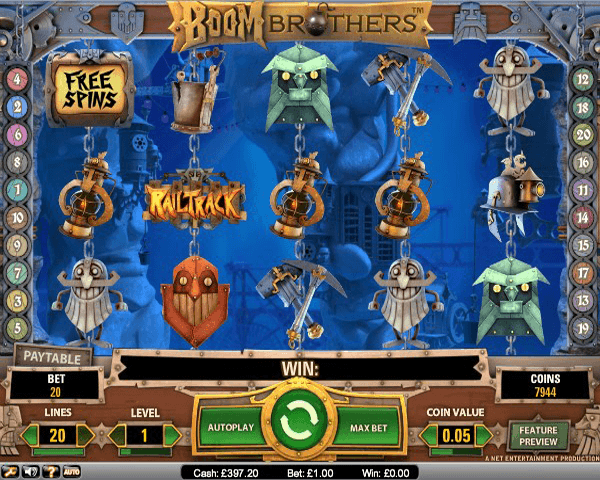 Boom Brothers is a video slot machine that challenges players to find their fortune in the hidden and lost Dwarven mines. The game has five reels and twenty lines. The game has a bonus round that is called Dwarf Railway Bonus and it also offers free spin rounds. This is not all as during free rounds, the winnings earned are tripled. The wagering range varies between 0.01 USD and 100 USD. The wild symbol of the game is the ticking tomb.

Boom Brothers is a very unique video slot that has a very unique theme. Instead of the usual themes that have thousands of games themed around, Net Entertainment provides players with this brand new and exciting theme. The game is themed around two brothers, the Boom Brothers who are inventors who create robots among other things. This is why players will notice that the entire game has an exotic theme to it with robots and mechanicals dominating the reels and the design of the game.

Of course, like any other Net Ent video slot, players will be able to enjoy great visuals and graphics that are unmatched anywhere else and they are also going to enjoy vivid and realistic audio effects that would help them get into the theme of the game and get engaged into the game. The game can be enjoyed at any of the Net Ent powered casinos on the internet, including Mr. Green as well as any of the casinos that are powered by Net Entertainment. Players can also enjoy the game with free credits right here so they can test the waters and judge the game before placing real money wagers. Lastly, the game is packed with rewarding features and lucrative line payouts.

The game is themed around the Boom Brothers who are very talented robot makers and inventors. Players will quickly realize that as they open the game and see the amount of robots and machinery that is found on the reels of the game. Speaking of which, the game boasts 5 spinning reels and a total number of 20 lines that players are invited to place their wagers on. On these reels and lines, players will see a large amount of robots, the logo of the game, a wild bomb, a lock, RailTrack, a Free Spins symbol and other related symbols. Even the interface of the game has the same theme as players will notice gears and other machinery parts surrounding the reels in the background.

Players will be able to place their stakes on each spin of the game at the bottom of the game’s screen by going through the 3 options that the game offers. They will have to choose from 1 to 20 paylines, a value of a coin that varies between 0.01 and 1 and lastly, a betting level from one to five. All of this helps in forming the game’s wagering range that starts at 0.01 and ends at one-hundred credits for each spin on the video slot.

The game has the 2nd Chance feature which is randomly triggered. If players do not achieve a win, they will get a second chance as one of the Boom brother will hover over the reels changing some of the symbols to give players a 2nd chance of achieving a win. The Wild Bomb can substitute any others symbols making it the wild card of the game and the free spins symbol can trigger free spins in which all winnings are multiplied by 3.