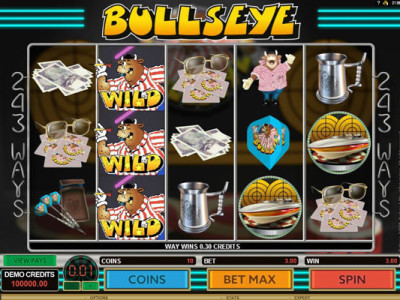 The Isle Of Man based gaming developer, Microgaming, has been on a roll. It has released more than its fair share of new slot games for December, and the surprises just keep on rolling. Microgaming delivers a new super smashing and a great slot machine to its operators and players, Bullseye. The game is about the classic Television game show that had the same name as the game, Bullseye.

This show was presented by Jim Bowen, the stand-up comedian, and it became a huge hit and one of the most popular TV Game shows. The TV Show was based around a game of dart throwing, which is pretty obvious from the title of both the game and the TV Show, Bullseye. So get ready to enjoy a truly one of a kind gaming experience that is based on that hot TV show, which is accompanied by great visuals, sound effects and of course, a great set of payouts and bonus features.

Get ready to enjoy retro and a classic gaming experience that brings back a lot of memories and offers a one heck of a nostalgic experience. This is because the game takes players back to the Bullseye Game show that was presented by none other than Jim Bowen. Just like the Game Show, the game is themed around a game of darts, which not only affects its visuals, but even its bonus round, which is basically a game of darts that will give players a lot of rewards. The game can be pretty rewarding to players, whether through the regular payouts of the game, or the special bonuses and icons.

Bullseye is a new slot by Microgaming that is going to allow players to revisit one of the most popular TV shows of the era. It is the Bullseye game show. The slot also embraces many of the features of the show that made it that popular. This includes the one liners, the Bully’s star rewards, the prize board and more.

Like the TV show, there are 3 contestants that are competition against each other to win prizes, the mascot of the game show was Bully, and he used to make appearances throughout the game show, and he would also appear as a symbol on the reels of the game to help players get paid.

The game’s wagering range varies between 0.30 and 15 credits, which is a result of the 243 ways to win of the game and its betting variables.

The free spins icon can trigger the free spins bonus feature for players when 3 of them land on the reels. This will give players 15 free spins with doubled prizes. There is also the bonus darts board icon that would trigger the bonus round of the game where players will throw darts to earn massive rewards.