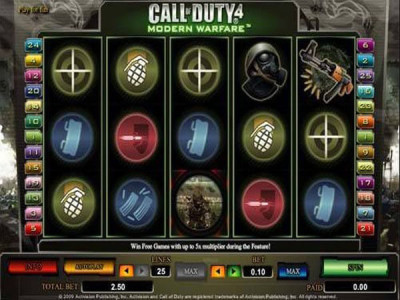 ATTEEEEEEEEEEN-SHUN! Listen here, private! It’s time to get debriefed on your mission! You’re in a war zone in the modern times and you, soldier, are now tasked to defeat the terrorists that plot to eradicate the very essence of society. So, you ready to take them evildoers and take them down to save the world? Then get your butt out of cowardice land and play the slot game that is Call of Duty! Get to it!

Call of Duty 4 Slot Machine is a slot game based on the best-selling video Call of Duty Modern Warfare. You’ll no doubt see the design based from that game: the soldiers, the guns, the sound, the background, everything. If you’re a fan of the Call of Duty series or you’re a gamer and you like your first-person shooters, this game’s got you covered. Although it doesn’t let you go online with other players to shoot them for team deathmatches (obviously it’s a slot game. Who in the world wins the war with a slot game?) nevertheless the developers Cryptologic did their best to capture the very spirit of COD and translated it into a slot game.

You can already see right from the start the game is war-ridden. You can see smokes, fogs, bullet holes, guns and everything that screams ‘WAR’. You’ll recognize some of the distinct art style that gives COD that modern touch on its art and in this slot game, there’s no exception. The symbols used in the reels are the icons used when you play multiplayer such as the increase in mobility and the weapon upgrades so any COD multiplayer addict will be delighted to see these symbols used for the game.

The symbols trigger an animation if you make a winning combo but it’s mostly just for show. There’s nothing to brag about but it does give it a nice touch to the game.

Call of Duty 4 is a hybrid slot game. It’s a 5-reel, non-progressive, 25 –payline slot game so if you got some good strategies with the slot games involved, you can apply them here. There’s nothing like netting yourself more winnings by combining all the strategies you do with slot machines in this game.

As always since there are paylines in this game, both newbies and high rollers can make their bets with some good results. Your bets can from 0.01 up to 500 making this game one of the best to go to when you want to risk it all to win it all. Another distinct feature with this game is the currency being used. Now you can use the dollars, pounds or euros when playing the game. This should make anyone who uses any of the abovementioned currencies grin with joy.

This game has a bonus round and you activate it when you get three or more Call of Duty 4 symbols. When you activate the bonus round, you’ll be tasked to shoot down five soldiers and an air strike follows after. Each shoot you make will give you instant cash and free spins. Well, at least this lets you play a little point-and-shoot. The developers definitely put it in there for the fans.

Besides these features, you can also have access to some cool features such as the Auto Play, where you can make random spins if it makes you feel bored inputting your bets. Then there’s the rule page where you can see what are the values of the symbols you’ll spin for money. You can also see the patterns of the paylines. They even have the patterns of the explosions that the Wild Symbol (the soldier) makes when he blows up to expand itself. Great bonus right?

With its great integrated design, well-implemented graphics and sound effects, fun bonus round and a very interactive wild symbol (soldier), you’ll be having fun going on duty to win the slot game to save the world from utter terror! So private, ready to take them on? Then win the game son!