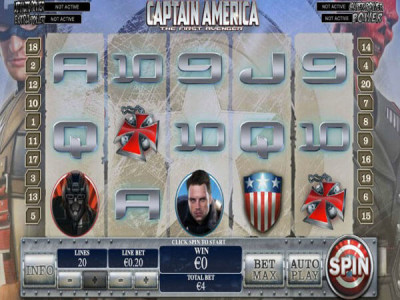 In a few months, the Avengers will finally make their movie debut in May. It’s going to be one of the most-awaited movies this year. But before you go crazy about the heroes of the Earth going against the bad guys (whoever those are), why not you go back in time before there was a green raged monster, a flying hammer god and a robot-suited man? What’s say you get acquainted with The First Avenger himself, Captain America in his slot machine debut? It’s time to go head strong in The Captain America Slot Machine.

The Captain America Slot Machine is a 5 reel, 25 payline video slot machine that’s got a progressive jackpot which means the jackpot begins to grow and grow as more and more people play the game. Any chance you get in winning that progressing jackpot will win you a lot of money.

The Captain America slot game is designed to showcase the striped hero at his best. The game’s symbols feature many of the Captain America images and icons moviegoers and comic book fans will love: from the Captain America logo to the Statue of Liberty up to the Top Secret Folder That Might Reveal Secret Info, you’ll see that epic feeling of Captain America as he rides along in his quest to save the world from baddies everywhere.

Because this slot game is based on the comics, you can see just how comic-like the slot game is. Check it out for yourself: the text, the structure, the style… it looks like a living comic book. The symbols and images of Captain America, of the Red Skull and of the Winter Soldier really indicate they were plucked out of the comic book and there’s nothing wrong with that. It truly shows the dedication the developers had in making this slot game an authentic Captain America experience.

Now for the meat of the game. This Captain America slot game plays on 5 reels and 25 paylines. As always, you have a choice to play either 1 or all of the paylines. Minimum or max, everyone’s bet choice is welcome in the game. But if you really want to feel like your hero Captain America, then why not take a risk for once? Captain America’s kicked more bad guy hinds than soccer balls so you can go ahead and take a chance. Oh and if you’re wondering the biggest max bet you can make, you can go for at least 12,500 coins! That can mean $62,500 for you if you win. Not a jackpot but c’mon, who in the world wins $62,500 in a single day? This might just be your lucky day.

The game’s got a progressive jackpot but don’t despair if you don’t win one because there’s two more of them. If you didn’t win one jackpot, who’s to say you can’t win the other one? This gives everyone a chance to win the life-changing jackpot. But there are other ways to win so hang in there, soldier.

The Wild Symbol for this game is the Man with the Shield himself. He’ll substitute for any symbol needed to win the combo (especially if you want that elusive jackpot waiting for you). But the only symbol he cannot be accounted for is the Scatter symbol. While other games can do that, this one won’t. But all other symbols can be substituted for don’t worry about a thing.

As always, if you’re confused about the rules and values, the game has a rules and help page made for you. You can see the rules as to how the game works, you can see the value of the symbols such as what you will win if you get the same number of symbols aligned in a row or in a line and other neat things you’ll learn of the game. You’ll also see the jackpot number increase as you go along. This should motivate you to get more bang for your back and win that jackpot.
So what are you waiting for? It’s time you played this wonderful Captain America Slot Machine! With its unique brand of comic book art style laid down on the slot design, its three progressive jackpot waiting to be won by anyone with a few coins, its awesome bonus features, you’ll feel like your favorite super hero Captain America when he won the war against the Red Skull. It’s time to take down the baddies of the world with your slot game skills and be Captain America!