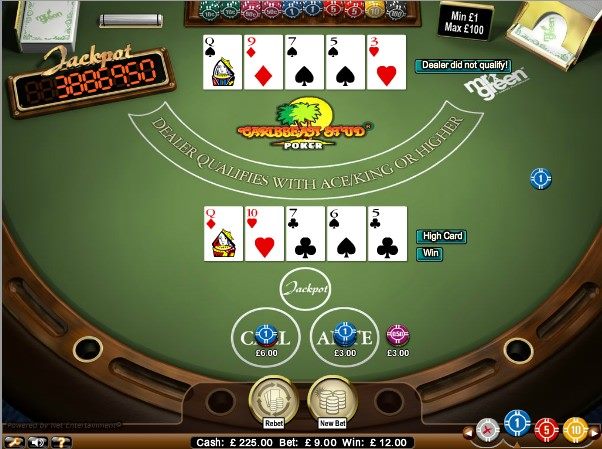 Caribbean Poker by Net Entertainment features the usual five-card where players play against the dealer instead of playing against each other.  In addition, there is a side bet that players can place that rewards them if they get Three of a Kind or a higher poker hand. The game also has a progressive jackpot that is hit when players get a royal flush.

Caribbean Stud Poker is your usual 5-card poker game but instead of playing against fellow players, the game is strictly between the player and the dealer who represents the casino. The game has the same procedure and betting order of a 5-card poker game and it also comes with a progressive jackpot that players can trigger if they get a royal flush. The game is presented to players in captivating graphics and dealing visuals and outstanding digital sounds. All of this helps players getting into the mood of the game by mimicking the casino environment and table layout of Las Vegas casinos. The game is powered by Net Entertainment, this is why players will be able to enjoy this game at any of the internet casinos that are backed by Net Entertainment like Mr. Green Casino.

Like any poker game, the players will start the game by placing a bet called the Ante, which is the initial wager that poker players have to place at the beginning of the game. The players will place the ante by choosing any of the chip sizes available. They will simply click on any of the sizes and place them on the Ante circle on the table. Apart from the ante bet, the players can also activate the progressive jackpot by placing a wager on the Jackpot circle. This jackpot is triggered by lucky players who achieve a royal flush.

After players place their desired bet, they can click on the deal button. The players will get five cards facing up while the dealer will be dealt 5 cards, 4 of the 5 cards will be facing down and only one card will be visible to the players. The players will then choose to either fold or call. If they fold, the game will end and the ante will be lost. If they call, they will place another wager that is 2x the original wager, the ante. After they place that wager, the five cards of the dealer will be revealed. The show down will then take place between the cards of the dealer and the cards of the players.

The dealer has to have a hand that includes an Ace and a King at least in order to qualify. If the dealer fails in achieving a qualifying hand, the player will win even if he has nothing. Most hands pay one to one but there are other higher hands that can pay players up to 300:1. These payouts can be viewed by players at the paytable of the game that is located at the top right area of the screen.