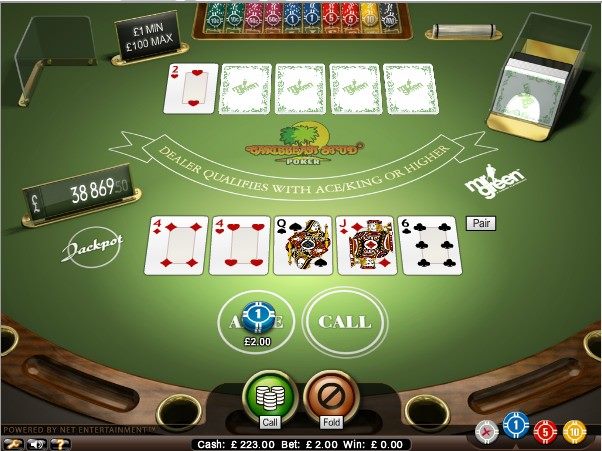 Caribbean Poker Pro Series is an internet poker game that has the classical poker theme. It is provided to internet casinos by Net Entertainment. The supported chips that players can place wagers with is one, five and ten. The wagering limit varies between one and forty. Players place an Ante and they get five cards as well as the dealer. Players will only see one card from the dealer’s five cards before they decide to bet or give up their hand.

Caribbean Stud Pro Series is a very rewarding and an entertaining video poker game by Net Entertainment. Net Ent is known for providing its players with the best possible gaming products and it has one of the best video poker gaming portfolio. This game is directly from this amazing video poker portfolio as it comes with a jackpot and awesome graphics and sound effects. The shuffling sounds, the dealing visuals and the background music will take players right into the mood of the game.
Caribbean Stud Pro Series  is a video poker game between the player and the dealer but there are no players involved, as the player will only need to beat the hand of the dealer in order to win.

The game will start as players will place a bet that is called the Ante bet. This bet is placed on the wagering circle that is located on the poker table that says Ante. The players will click on a coin size and use it in order to place the wager. The minimum wager that can be placed is equal 1 credit while the maximum credit is equal 100 credits. The Ante bet is placed before players can see their cards.

After players place that wager, they will be dealt five cards facing up while the dealer will give himself five cards, only one of them will be facing up. The players will then device whether they want to fold or whether they want to continue. If they fold, they lose the ante bet that they have placed and if they choose to continue, the will place a wager that is equal double the initial that they placed as an Ante bet. Players who click on call will continue the game.

The game has a jackpot that can be very rewarding to players. In order for the players to win that jackpot, they will have to first place a bet at the beginning on the Jackpot wagering circle. The players will have to get a poker hand of three of a kind at least to be able to claim a part of the jackpot. The players will only claim the whole jackpot if they succeed in getting a Royal Flush. They will get varying percentages of the jackpot between three of a kind and royal flush.