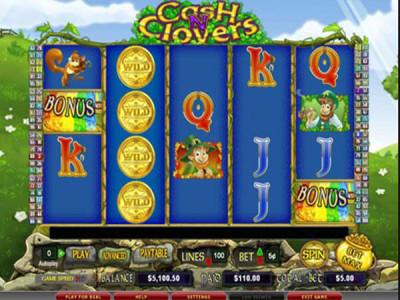 Do you believe in the pot luck of gold at the end of the rainbow? Or the luckiness of four-leaf clovers? Or maybe the fact leprechauns can give you all of these at the snap of a finger? Well, sorry to burst your bubble but those things don’t exist in real life. They’re nothing but myths. Or are they? Well, Cryptologic sure aren’t realists when it comes to winning jackpots. They’ve taken these myths and turned them into a slot game. So why not relax and win your own pot of luck in Cash N’ Clovers Slot Machine!?

Cash N’ Clovers is a hybrid slot game which has 5 reels and a whopping 100 paylines! This is one of the few slot games from the developer that features 100 paylines. That’s quite a lot and considering how much you can put in each line, it will surely net many betters a lot of money if those paylines actually win. But don’t be so sure of that; the patterns are mostly on two rows so it may not win you more than you thought you would but don’t worry, you’ll still win. It’s good for more bankroll to follow.

Cash N’ Clovers’ slot design is somewhere along the lines of cartoon and cuteness. You’ll see just how colorful the design is and how cute the symbols are. You have your cutesy fancy rabbits, your cutesy radical leprechauns and the cutesy shiny symbols of luck. This will really let you feel like you’re getting the luck of the Irish. Include in this cutesy-filled game is a song that plays along giving you that Irish feel.

Betting on the paylines is a convenience for all players, whether they want to risk it all or save it all. Bet max, bet minimum, bet middle, it doesn’t matter: you have the choice. With 100 paylines to choose from, you’ll really need to make a good choice on how you’ll make your bets so make the right choice all right gamer?

Moving on, you now have the bonus features of this game and as expected, Cryptologic took the quote “luck of the Irish” to a whole new level. They’ve made bonus features that reflect upon the so-called luck and made it so people can expect to win more than they bargained for. That’s something most people don’t get much in ordinary slot games so this slot game at least gives a chance of luck for anyone who tries.

The wild symbol is the Cash N’ Clover logo which will be active upon the number of paylines activated. But it doesn’t substitute for other symbols or make a multiplier of winnings so don’t expect anything to come out of this thing. But it does help along with the paylines so don’t diss it yet.

The better wild symbol to get is the Super Wild Coin and as such, it follows the rules of the wild symbol but its best feature is scattering itself. This means it fills up the reel to such a speed it will win you instant prizes. Get this coin and you’ve hit the luck of the Irish gamer!

The best bonus and the one where the luck of the Irish is manifested is the bonus round. When you’ve hit two or more bonus symbols, you’ll get the bonus round which you’ll get free spins, multipliers and other freebies all by getting a pot of luck on the reel. More pot of lucks means more multipliers and freebies so go ahead and get that luck of the Irish the developers have built their game if upon.

If you’re not yet used to luck, why not get yourself acquainted with the rules of the game? The game has a rules and help page so if you need to know the values of the symbols and the patterns of the paylines, you have the means to know it. You’ll also see how to activate the bonus rounds so go ahead and get yourself used to the rules. One way or another, you’ll need to know how the rules go by in the game.

In short, Cash N’ Clovers is a great slot game. With its cutesy art design and great gameplay along with the best bonus features that a slot game can offer, you’ll definitely feel like you’ve gotten the luck of the Irish. Top that with the traditional folk tune of luck and you’ll see your own rainbow leading to your pot of luck.