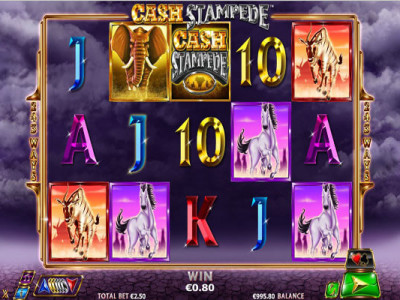 Cash Stampede is a five reeled pokie that takes players on a wild ride into the wild African desert for a truly unique adventure that will have them coming back for more. The game can be played here for free as we host the game with demo credits so players can check out what the game has to offer and enjoy its game play and features before placing real bet at the pokie machine at the online casinos that offer it for real cash. So get ready for an action packed, African Safari themed pokie while spinning the reels of this game, Cash stampede.

Cash Stampede is one of the relatively new games by Next Gen Gaming. The game invites players to go on an amazing ride into the African Safari desert as they join all of its vicious animals as they go on a stampede. While getting stepped on is certainly a bad thing, but this is not the case with this pokie, the Cash Stampede. As players will get to claim a lot of rewards and trigger many features while enjoying the African Cash Stampede. The game is live at Next Gen Gaming powered casinos and it is available here for free for players to try it out.

Cash Stampede is a five reeled pokie machine that comes hosting a total of 243 ways to win for players to place their wagers on and claim great prizes. They will get to place these wagers at the control panel that is located under the reels as they toggle through the video pokie’s wagering options. Once they have placed the bet, they can get ready to enjoy the Cash Stampede experience.

The game takes players to the African wild where they will get to accompany all of its vicious and deadly animals who are going on a Stampede. This Stampede can be quite rewarding as the line payouts of the game are quite generous, in addition to the special features and bonuses that the game has in store for the players. Players can find all about the special features of the game, the regular payouts and more at the payouts page of the game, which is opened as they click on the “i” button under the reels on the left side.

The game has a pretty easy wagering procedure, as players will simply toggle through the available fixed bet values under the reels. The smallest bet is equal 0.25 while the biggest bet is fixed at 50 credits for each spin.

The pokie machine comes with a wild icon, which is the Cash Stampede logo of the game. This wild symbol will replace all other icons when it lands on the 3rd reel, but it will not replace the scatter symbol. There is also the Cash Stampede re spins feature that is activated if a wild helps in creating a wining comb with one of the animal symbols. The golden coin is the scatter symbol that can activate the free games feature when players get at least three golden coins on the reels. Players shall earn 8 free games.