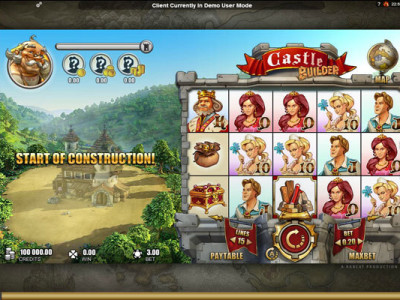 Castle Builder is a pretty unique game that has the power of Rab Cat Gaming. The gaming developer offers a small, but an extensive and a varied gaming selection of games that come with different and exciting themes. This game takes players back to the medieval era where they will build their own castle and kingdom as they try to marry into rich families and get a lot of prizes.

The game has amazing visuals and an interactive game play, and it comes packed with plenty of high paying symbols as well as bonus features and icons that can help players in claiming massive prizes. If you are looking forward to enjoying this game, you can do it right here for free before playing it with real money.

Build your castle, receive marriage proposals and get married into rich families and build your kingdom. This is exactly what you are going to do through this game, you will build your castle and expand your empire across the map by collecting resources. The game has the very exciting and an interactive theme that holds many special features and payouts for players to claim. The game is powered by Rab Cat, offered in wonderful visuals and most importantly of all, it is free to play here with demo credits. So place your demo bets and get busy building your castle and start claiming great prizes.

The game has a medieval theme. The game takes players on a one of a kind gaming ride into the medieval era where they will be responsible for building a castle, and then a bigger castle and a bigger one after that across the map so they can build a kingdom and get marriage proposals from rich and wealthy families.

The game offers such amazing theme through 5 spinning reels that host 15 bet lines. The reel set is located on the right side, while the building site is found on the left side and under the reels, there is the control panel. As for the symbols, they are inspired by the medieval age as they include a king, a queen, a prince, a castle, wood, stone, golden treasures, a treasure chest, banners and more.
The Wagering Range

The game’s 15 lines are always active, and players would only choose the value of the coin used on each line. The coin sizes vary between 0.01 and 1. This means that the betting range of the game varies between 0.15 and 15 credits for each spin.

The game hosts a wild icon, which is the castle builder. This wild icon can replace all other icons, except the building symbols. Players will collect building symbols in order to progress in building the castle, and when it is complete, they are going to host a the Wedding Bonus in which they will choose one of many proposals and get paid according to their choice. They will then move to another place in the kingdom and start over to earn more cash.