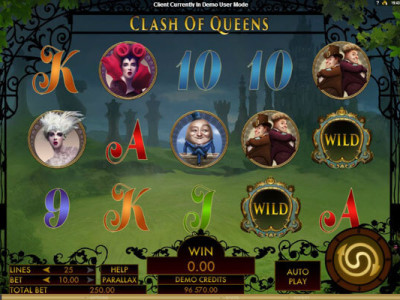 Clash of Queens is a newly released Genesis powered slot, and as accustomed, we always offer the newest games here for free so players can get to try them out before placing real bets at online casinos. The game is entitled Clash of Queens, which is quite fitting to the theme of the game that features two queens that are in a state of war, these two queens are the red Queen and the White Queen. The game is inspired by the fantasy novel that was written by Lewis Carroll that was entitled, Through the Looking Glass. Another memorable novel by the same writer is the highly popular “Alice in Wonderland”.

Genesis Gaming has released a brand new game that is a great addition to its already rich and extensive portfolio of games; it is this game that we have here, Clash of Queens. This game has a 5 reeled setup that hosts a total of 25 bet lines. Since the game is powered by Genesis Gaming, players can expect a visually entertaining gaming experience that is fun and rewarding. The game is available here for free for players to enjoy with demo credits before they place real cash on any of the casinos that offer the game.

Clash of Queens is a new Genesis powered slot game that is build around the great novel by Lewis Carroll “Through the Looking Glass”, Lewis Carroll is well known for another novel, Alice in Wonderland. Like the latter, this game takes players into a fantasy world where a Red Queen is at war with a White Queen, which explains the title that was chosen for the game. This is why these two queens are going to appear as symbols on the reels of the game, and they represent the highest paying icons of this slot. Other icons that include characters from the novel depict Humpty Dumpty, the Tweedledee and Tweedledum couple. Other icons include the traditional poker card icons that come in great designs.

The game has a 5 reeled setup that is home to 25 bet lines. Players will place wagers on these lines as they go through the 2 betting variables that the game has. They are the coin value and the number of lines.

The above mentioned betting options would create a betting range that is between 0.01 and 250 credits for each spin of the game’s reels.

The logo of Clash of Queens is the scatter icon of the game that gives scatter pays that vary from x2 to 50x the placed bet. The royal wild icon is the substitution icon that would help players create a winning combo by replacing other icons on the reels of the game, except the scatter. It can only land on the last three reels of the pokie. The game has a bonus feature that is triggered when one of the queens land on the 1st reel while the other lands on the 5th reel. This will trigger the Chess battle bonus through which players can proceed to other bonuses including pick me bonuses and free spins.