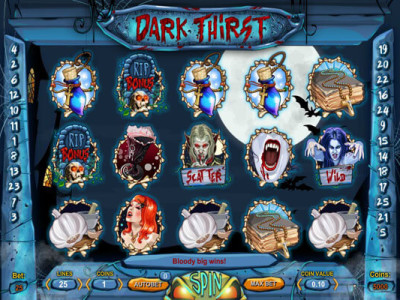 Dark Thirst is the second game by 1×2 Gaming to come with a vampire based theme. The first game was Blood Bank that we also have on our site. Blood Bank has cartoonish and friendly symbols, which is not the case with this game. This pokie offers a gruesome and a scary vampire themed experience, this is why all of the symbols are bloody and have realistic graphics and designs.

As the usual from any 1×2 Gaming powered pokie, the game has many winning chances, generous line pays and special icons that players will certainly enjoy taking advantage of during the game play. All of these line pays and the game’s special icons can be viewed with ease through the paytable of the game that can be opened as they click on the paytable, which is found at the bottom right corner.

A game that is called Dark Thirst does not really need an introduction, this is because it is quite obvious what the game has, which is a scary and a bloody vampire theme. Also being a 1×2 Gaming powered pokie gives players an idea on the level of quality and game play that they can expect whenever they decide to give the game a few spins. The game has amazing visuals that are covered with blood, a great set of line pays and bonus features with special icons.

The game has 5 reels and hosts a total of twenty five bet lines. Players will place their desired wagers on these paylines before they start spinning the reels so they can start earning back great rewards and trigger the bonus rounds of the game.

The theme of the game is about the Dark Thirst of Vampires for human blood. This is why all of the symbols that are going to appear spinning on the reels and the game’s lines are about vampires. They include vampire fangs, a vampire bride, a bat, a tombstone, garlic, a cross, holy water, and everything else you may expect to find at a vampire themed game.

The games’ betting range varies between 0.01 and 62.5. It depends on the value of the coins used, the number of active lines and the amount of coins on each of these lines.