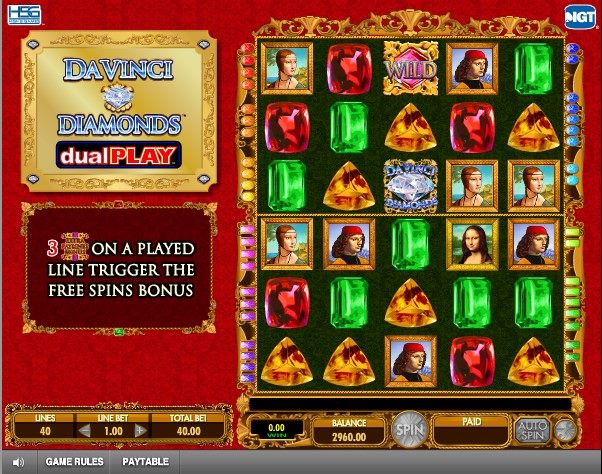 DaVinci Diamonds Dual Play is twice the fun as the usual DaVinci Diamonds, it is double the fun and double the tumbling reels. At each spin, the symbols at the bottom tumble down as they are replaced by new ones that tumble from the top. It has five tumbling reels and forty paylines. It also offers amazing features such as the Tumble Thru Feature and Free Spin Feature alongside Wild symbols.

DaVinci Diamonds Dual Play invites players to enjoy double the fun, double the rewards and double the reels through its Dual Play feature. Players who enjoyed DaVinci Diamonds video slot, which is another creation by IGT (International Game Technology) will certainly enjoy this game as it presents players with that same experience but with a double dose of everything. The game also has a very rewarding feature which is the Tumble Thru feature that allows players to win again and again with only one spin.

This shows that the game provides players with a very visually entertaining experience, through the tumbling reel feature and the top notch quality symbols and visual effects as well as a rewarding experience through the Tumble thru feature. Not only the Tumble Thru feature as the game has plenty of other special symbols and rewarding features that players will be able to earn great rewards through. The game also provides players with two sets of DaVinci Diamonds, this is why the game is called Dual Play. So players will be spinning two sets of 5 reels and 20 lines per spin which doubles their chances of winning and earning great rewards.

The game, like the original game, is themed around DaVinci and his works, players will enjoy the same symbols that appear on the lines and reels of the game including the Mona Lisa, other paintings and diamonds as well as the special symbols. The game has a very unique setup that is worth talking about. The two sets of reels are disconnected in terms of lines but they are connected in terms of reels. This means that the symbols tumble from above onto the two sets. So whenever players hit the tumble thru feature in the bottom set of reels, all of the symbols in the two sets will start to tumble down and new ones will replace them. This means that it even if the bottom set triggered the Tumble Thru feature, players will get new chances of winning in the two sets.

For this game, players will choose a line bet to place a bet. The bet can be as small as 40 and as big as 2000. Players will not choose lines since all of the lines are automatically activated.

The Tumble thru feature occurs when players get a winning combination with similar symbols, when that happens, these symbols will explode and the symbols above them will fall to take their place with new symbols falling from above in order to fill the gaps. This gives players a lot of new chances to achieve a win.
Apart from the Tumble thru features, the game also has a wild symbol which can replace any other symbol as well as a scatter symbol. This scatter symbol is the logo of the game and it can trigger free spins as well as rewarding players with instant rewards.