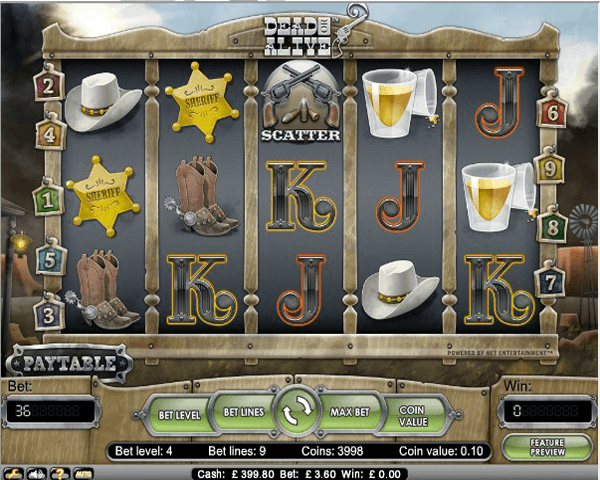 Dead or Alive is a nine payline video slot machine that has five spinning reels. The game is themed around the Wild West and it is developed by Net Ent. The game is very unique and distinctive game due to the sticky wild symbols feature that exists during free spin rounds. When a wild symbol appears on a free spin, it will stick in its place for the remaining of the spins. If players get five wild symbols, they will be rewarded with a great payout.

Dead or Alive is a video slot that is obviously themed around the Wild West. Dead or Alive is something that we all saw at Western movies. It was on the wanted posters in that time when they wanted to catch a criminal. A very dangerous criminal would be wanted dead or alive. This is what this game is about as players will notice the western theme of the game as they open the game and see the symbols, the design and the soundtrack in the background that players will hear while playing.

This is why this game is dedicated to all of the western movie lovers out there as Net Entertainment creates a Western themed world through every aspect that the game offers. It provides players with an immersive gambling experience that they can enjoy while earning a lot of rewards. Players can earn these great rewards through the different line payouts that the game offers as well as the special and bonus features it provides.

The Western theme of the game is created carefully to provide players with a very intriguing and an immersive experience. Players will be taken into that world that the game has created through the symbols, the features, the design of the game and the soundtrack. Starting with the symbols, they appear across 5 reels and 9 lines of the game. The symbols include a belt buckle, a gun, coffee, a sheriff’s hat, a sheriff’s badge, cowboy boots and a wanted poster. Other symbols include card symbols that are designed to fit the theme. The reels themselves are located in a desert Western town as players can see buildings and the dirt behind the reels. The columns that separate between the reels of the game come in the shape of wooden planks, like the ones we see in Western movies that were used in buildings. Not only the reels, as the wagering options under the reels also pinned to a wooden plank. All of this helps players to get invested into the game’s theme so they can enjoy the game.

The wagering options can be found at the control panel under the slot’s reels. Players will go through the different options that the game offers so they can determine their final bet. They will start by choosing a number of lines that they wish to place stakes on. They can choose from one up to nine lines. They will then choose a bet per line (1 to 4) and a coin value that ranges between 0.01 and 0.50. This makes 18 credits the maximum wager possible at the video slot per spin.

The game’s scatter icon is the two crossed guns. Three of the scatter symbols appearing on the reels of the game will trigger the free spins round that will award players 12 free spins on the slot. The Wanted Poster is the wild symbol that can substitute for any symbols that appear on the game’s reels.