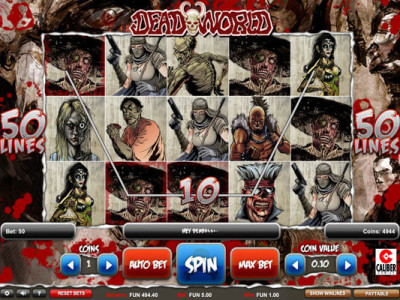 Welcome to Dead World, a world that is infested with the Zombie Virus that allows players to eperience life in a post apocalyptic world. The game is brought you through a collaboration between 1×2 Gaming, one of the big names in the industry, and Caliber Comics. This allowed the gaming giant to create a video slot machine that is about Caliber Comic’s Dead World Series. Join the protagonists of the comic as they bash, smash and slash their way through zombies to survive this apocalyptic world.

Players will not only join these characters and the zombies that threaten them for fun and an exciting ride, as they will also be able to claim many fortunes and prizes that this comic book themed slot machine has to offer, whether through the line pays of the game, or its special icons.

Caliber Comic’s Dead World doesn’t need an introduction. It is a well established comic that is themed around a post apocalyptic world where the world is infested with brain dead, brain eating zombies. Try to survive this apocalyptic world and smash your way through these zombies for a chance to live longer, plus earning the great payouts that this amazing 1×2 Gaming slot has to offer.

This game is also one of the newest slots by the gaming developer, but it quickly gained popularity among players, especially with the Zombie theme that is so mainstream these days. You have The Walking Dead TV show, iZombie, Z Nation as well as an endless list of movies and video games that are all about the walking dead, the zombies.

The game has a strong theme, which has played a great part in the success of this game, it has a zombie theme. As the name of the game implies, it is themed around Dead World, the Caliber Comics series. This is why the entire game’s interface is stained with blood, to fit the bloody post apocalyptic world that the game takes place in. The same goes for the symbols that will appear on the reels of the game that include the protagonists that are trying to survive this plague, as well as the dangerous brain eating zombies that are after them.

1×2 Gaming brings players this scary, but exciting gaming experience in a 5 reeled format that hosts 50 fixed paylines through which players can earn plenty of rewards.

With a fixed number of 50 lines, players will only get to choose the amount of coins to place on these lines (from 1 to 5 coins) and their value which varies between 0.10 and 0.50. This means that the minimum bet is equal 0.50, and the maximum bet is equal 125.
Bonus Features

There is the skeleton scatter icon that gives players instant scatter prizes that vary between 90 and 500 credits. Another special symbol is the wild Zombie female warrior. This wild icon can stand for other non special icons to help create a winning combo. Lastly, there is the zombie bride, which can trigger the bonus round when players get from 3 to 5 bonus zombie bride symbols.