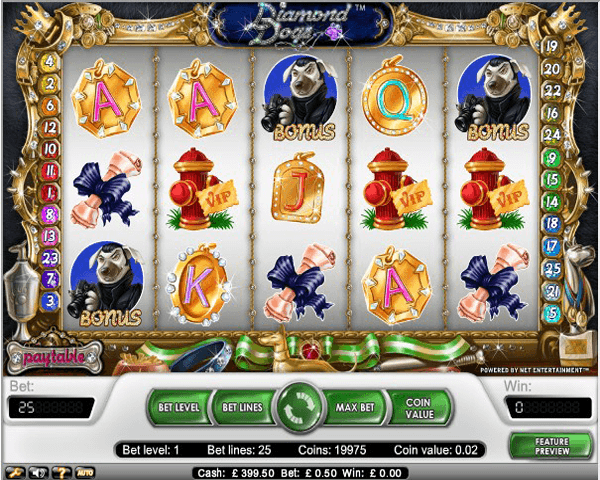 Diamond Dogs is themed around two main themes. It is clear from the name of the slot game that the game is themed around Diamonds and Dogs. This is why the symbols on the reels include dogs, diamonds, piece of meat, thug dog, secret agent dog and a dog house. The game has five reels and twenty-five paylines. The game also offers a free spin round and all of the winnings that are earned during the free spins are tripled.

Diamond Dogs is a video slot machine that will take players into an alternative universe, to a world that is controlled by dogs. It will take players to the royal life of the diamond dogs, hence the naming of the game. Net Entertainment powers this game and it creates such alternative world through the wonderful graphics and visuals and the amazing sound effects that accompany them. The software developer also packed the video slot with plenty of rewarding features to guarantee players a fun filled experience that is very rewarding.

Players can expect top notch quality in terms of graphics, sound effects and the game play sine the game is developed by none other than Net Entertainment. Players can enjoy this thrilling video slot at any of the Net Entertainment powered internet casinos such as Mr. Green, in order for players to play it at these casinos, they will have to place real money wagers. If players wish to play the game for fun without stress, they can do that right here on this page.

The game is themed around a world of dogs, therefore the game is named Diamond Dogs. Players will be taken right into that world through the sound effects and the visuals of the game. For example, players will hear a dog bark every time they click on the spin button. As for the visuals, starting with the symbols on the reels. They appear on a setup of 5 reels and 25 lines, they include a detective cop, a belt, a royal meat meal, a bell, a dog house and a wild bully dog. Apart from these symbols, there are the usual card symbols from 10s to Aces but they come engrave on a piece of gold to fit the theme of the game. Not only that as the layout of the entire game is also themed around dogs. For example, the paytable that can be viewed at the bottom left will be opened by clicking on a dog bone shaped button. The rest of the layout is inspired by the diamond theme with diamonds and jewelry surrounding the games reels.

Players will find the wagering options right under the dog themed reels. They will find the different options that they can toggle between so they can place their final wager at the game. These options are the number of lines (1 – 25), a bet per line and the value of the coins used to place the wager. The coin sizes vary between 0.01 and 1. The minimum wager possible is equal 0.01 while the maximum one is equal 100.

The fancy dog wearing a jacket and sunglasses is the scatter symbol. This scatter symbol awards players generously through scattered rewards and by activating 10 free spins if a minimum of 3 appear on the reels. The thug dog is the wild symbol that can substitute for any other symbol.