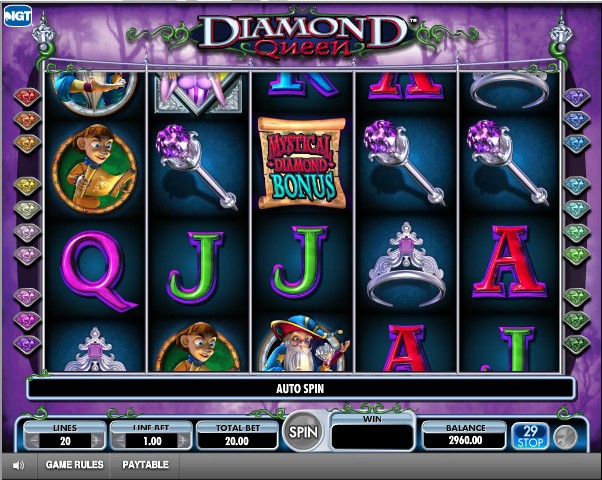 Diamond Queen is an IGT slot machine that was transformed from land-based casinos to online casino. This is why there is a lot of resemblance between this online game and the one found at land based casinos. It has many features and rewarding bonus rounds alongside free spins. It can be found at many online casinos such as Mr. Green.

International Game Technology, also known as IGT is famous for its great selection of video slots that come with unique and new themes. This game is one of these unique games. Diamond Queen is a very entertaining and yet a rewarding game that comes with five spinning reels, outstanding visuals, great graphics and outstanding digital sound effects. The game can be found at any of the IGT powered casinos such as Mr. Green Casino alongside other casinos. As for players who would like to try this game for free without wagering real money, they can try the video slot here for free, at VegasParadise.

Diamond Queen is based around the glitz and glamour of diamonds and the royal world. This is why the game is dominated with such theme. This does not only include the reels of the game but it also includes the layout, the design, the soundtrack and the bonus features.

Starting with the symbols, they include a jewel filled queen’s crown, a diamond scepter, the game’s logo, an old magician holding a diamond and a young female reading a magical scroll. The symbols also include diamond crafted poker symbols that fits the theme of the game. Since it is a video slot machine, many of the high paying symbols will turn into animated symbols when they are a part of a winning combination of symbols. Speaking of which, the players will find paytable of the game at the bottom grey strip. This paytable will show players all of the available winning combinations alongside the bonus features and rewarding symbols that the game offers.

The game has twenty paylines and different line bets which creates the range of wagering for the video slot. It creates a wagering range between one and 6,000 coins per spin. The players will be able to place a bet per line that varies between 1 and 300 while they can place bets on one up to twenty lines.

The game has a free spins round that is entitled the Mystical Diamond Free Spins round. The players will be able to trigger that round by getting 3 bonus symbols on the 3 center reels of the game. As for the logo of the game, it is the scatter symbol of the video slot, this symbol rewards players with instant scattered rewards when they get these scatters spread on the screen.