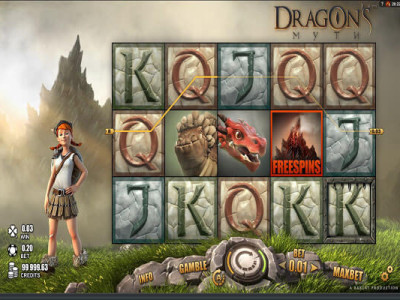 Dragon’s Myth is one of the great innovative games that are powered by Rab Cat Gaming. The gaming selection of Rab Cat Gaming is not that big, especially when compared with big names in the industry like Microgaming or Net Ent, but on the other hand, it offers a small extensive gaming selection that come with amazing visuals and exciting themes just like this game, Dragon’s Myth. As indicated through the title of the game, the pokie is about dragons, and it invites players to discover their lore as they join a small Viking girl who hunts dragons for a living to make money and save the poor cities from the death and fire that the dragons bring. So get ready for a wonderful Rab Cat Gaming powered experience that has a lot of rewards and a fun and an action filled adventure.

Dragon’s Myth is one of the latest Rab Cat gaming pokies to be released to the online gaming world. The game takes players to the Viking culture as they join a small redheaded girl who is out to hunt dragons and to discover their lore and myths. The game is full of dragons and Viking weapons which are fitting to the theme of the game. It also comes packed with a great set of winning chances, line pays and special symbols for players to take full advantage of as they spin the reels of the game.

The best part of all of that is that the game is available here for players for free so they can spin the reels as much as they can while using demo credits.

The game has a 5 reeled setup that hosts 3 rows of symbols and 20 lines. Players can form winning combos from left to right and vice verse since the game has the pay both ways feature. The game’s visuals are sharp and of top notch quality, which is not really a surprise given the fact that the game comes from the portfolio of Rab Cat Gaming. The visuals also depict the theme that the game is providing, which is all about Viking warriors and dragons. The game will take players on a great adventure into the Northern lands as they accompany a redheaded female dragon hunter so they can hunt dragons, and claim their share of the fortunes and the glory.

The game has 20 fixed lines with 1 coin per line. The only betting variable is the size of the coin which varies between 0.01 and 2, which means that the betting range varies between 0.20 and 40 credits per spin.