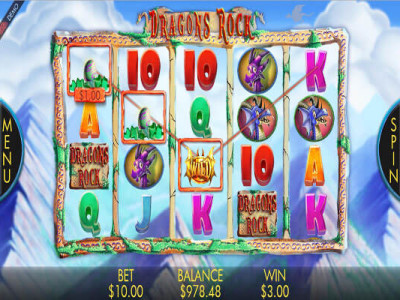 Dragons Rock is one of the latest games by Genesis Gaming that players can check out here for free as we host the game with demo credits. The game, as shown from its title, is themed around the mythical and legendary creatures, the Dragons. This is why the entire interface of the game and all of its visuals are inspired by that theme as players will see multiple fire breathing dragons appearing as symbols across the reels.

Being a Genesis Gaming powered slot machine, players can expect a fun ride that is presented in top notch visuals that would captivate them from the moment they open the game. They can also expect to find multiple winning chances and features that would make their stay at the game worthwhile.

Dragons Rock is a five reeled pokie that has the power of none other than Genesis gaming behind it. The game takes players on a great adventure onto an island that is inhabited by one of the most deadly and popular mystical creatures, the legendary dragons. Players will go to that island in order to witness the glory of the fire breathing dragons and enjoy a one of a kind adventure. That is not all, as players will also get to claim their own lion’s share of the golden fortunes and treasures of these dragons. Players will get to earn their share of these fortunes through the line payouts of the game, as the game has fifty of them, as well as the special features and symbols that the game hosts. Players can find all about the different prizes and the special features at the payouts page of the game.

Dragons Rock is a pokie machine that comes in a 5 reeled setup that is the host for 50 wager lines. This means that whenever players spin the reels, they will have 50 winning chances as they get paid when they get 3 or more matching icons on the same line from the left to the right.

The visuals of the game are of the highest quality, which is not a surprise as the game is powered by Genesis gaming, which has built a reputation for itself for its top notch casino games. The game is themed around an adventure that takes place on a dragon island. This is why players will see multiple dragons as symbols on the reels.

The game has a wild icon, which is the golden dragon symbol. This wild dragon is going to help players a great deal by replacing other icons that appear anywhere across the reels of the game, with the exception of the scatter icon. It can also give line pays, up to 1500 coins.

The scatter bonus icon is the bonus dragon’s egg. This bonus symbol can trigger the bonus feature of the game when 3 of them land on reels 1, 3 and 5.