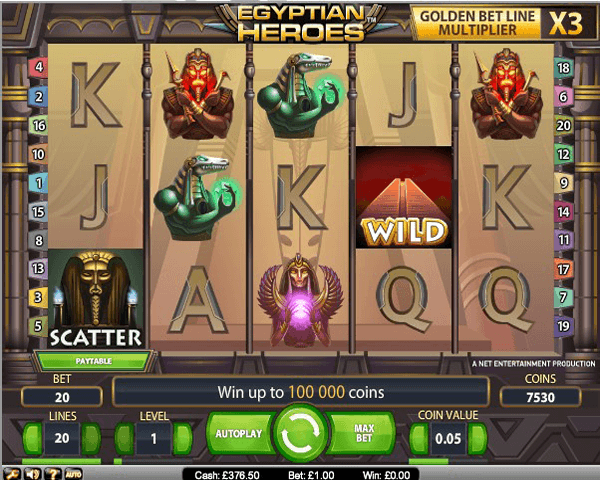 Egyptian Heroes is a Net Ent powered slot game that can be found at Mr. Green Casino among other online casinos. The game is themed around the ancient Egyptian Culture and it allows players to enter that mysterious world in order to grab a share from the treasures and riches of ancient Egypt. The game has five reels and twenty wager lines for players. The game has a lot of special features including a wild symbol, a scatter symbol, free spin rounds and a jackpot that pays up to twenty-thousand coins.

Egyptian Heroes is a 5 reeled slot machine that will take players into the time of the Pharaohs and the ancient Egyptian kings who used to rule over the land of the Nile thousands of years ago. These Pharaohs have built a reputation for themselves for having a lot of treasures and riches hidden in their tombs and monuments and this game allows players to go on a wild journey into the lands of these pharaohs and their monuments & tombs in order to find these treasures and grab their share of the riches. Players will be immersed into the theme of the game through the amazingly crafted symbols of the game as well as the vivid digital sound in the background. All of this creates a world of fun and excitement that players are more than welcome to go into right here at Best Casinos or at any of the internet casinos that are powered by the accredited software developer, Net Entertainment, such as Mr. Green Casino.

As mentioned, the game is based around the amazing world and the time period of the pharaohs. Explore the world and search for the riches through this game. The game creates that world through the amazing symbols that appear spread on the 5 reels of the game and the 20 lines of the game as well as the soundtrack and the design of the game’s interface, as the reels are located in an Ancient Egyptian temple with ancient Egyptian symbols and signs everywhere. The symbols include several Egyptian ancients gods who posses magical powers as well as card symbols (A, K, Q, J and 10) that are designed to fit the game’s theme. All of this helps players be invested into the game’s theme.

The control panel of the game, which is located right under the reels, contains a number of green buttons that players will click on in order to spin the game and specify their wagers. The wagering options are pretty simple. Players will have to choose the number of lines that they want to place wagers on, a coin value that they will use to place these wagers and a betting level which is a fancy term for the number of coins per line. Once players place a wager and spin the reels, they will see that bet on the left side the bet they placed and on the exact opposite, they will see winnings that they have earned through bonus features or the normal line payouts.

The pyramid is the wild symbol of the game, it only appears on the second, 3rd and fourth reel. The wild symbol has the ability to substitute for any symbols to create a winning combo. The game’s scatter symbol is the golden pharaoh mask. It gives great rewards plus activating the free spins round.