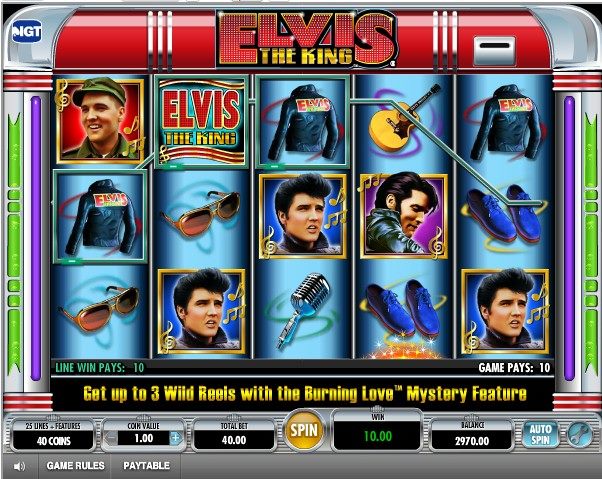 Elvis The King is an IGT developed game. It is one of the many slot machines on the internet that pay tribute to the great Elvis Presley, the Rock and Roll King. This is why the symbols are all inspired by the Rock and Roll world. The game is filled with amazing features such as Burning Love Mystery Wilds and the bonus round that is called Pick a Record.

Elvis The King is a very entertaining and a rewarding video slot machine that has the power of IGT behind it. This means that the players can enjoy this game at a variety of online casinos that are powered by IGT such as Mr. Green Casino. This game is a five-reeled video slot machine that boasts 25 different paylines for players to place their bets on. It has a high paying jackpot of 5,000 and it comes equipped with a great variety of multipliers, bonus rounds and bonus features that players will enjoy during their gambling experience.

The players will be able to place the bets at the bottom, like most video slot machines. They will toggle between the different coin sizes in order to make their final wager. Any wagers will have to include all of the paylines, this is why there is only one variable, the coin size. The coin sizes available include 1, 3, 5, 10, 20, 30 and 50. This creates the wagering range of the game that starts with 40 and ends with 2000 credits per spin. After players place the wagers, they can click on the Spin button on the control panel of the game in order to spin the reels and initiate the game.

The game has plenty of features and unique symbols that are very rewarding. For example, there is the Burning Love Mystery Wild Reels. This feature can reward players greatly on any single spin. This feature is triggered randomly and when it is activated, it can turn 1, 2 or 3 of the reels in the center into wild reels. Another feature is called the Jukebox Bonus Picker feature. This bonus can be triggered when players get three bonus symbols scattered on the middle reels of the video slot. The players will then pick one of three songs in order to reveal one of the three bonus features. These bonus features include a Free Spins round that can reward players up to 8 spins and it can be re triggered.