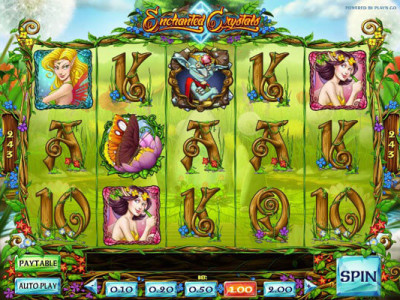 Enchanted Crystals is a marvelous online slot machine that comes from the varied and rich gaming portfolio of Play n Go. The game has a 5 reeled setup with multiple winning chances, whether through the ways to win payouts that the symbols can form, or the bonus features and rounds that the game hosts. The name of the game implies that the game has a magical theme that takes players into a mystical Enchanted forest that is full of magical and enchanted Crystals. The game really succeeds to deliver an experience that lives up to its name, as players will be mesmerized by what the game has to offer in terms of visuals, payouts and the magical experience that they will enjoy.

Enchanted Crystals is a 5 reeled, multiline video slot machine that has the power of Play n Go behind it. The game is offered in advanced visuals and hosts a pretty immersive game play that will have players coming back for more. The game achieves that through the well designed visuals of the game, as well as the equally outstanding sounds that help drive players into the magical Enchanted forest and its crystals. The game also comes packed with a great set of line pays and winning chances that guarantees players a lucrative ride that is certainly worth their time. Best part of all of this, is that the slot is available for players right here for fun through endless demo credits, so they can give the game a test drive before playing it for real.

Enchanted Crystals is 5 reeled slot game that offers players the high paying format, the 243 ways to win. This format is much more rewarding than the regular line based payouts. So whenever players give this game a spin. They will have a total of 243 different winning chances. The game itself takes players into the Enchanted fairy tale world, with its wonderful sparkling visuals that are inspired by that magical world. Players will also be welcomed to the game with a short high quality clip that shows players what they can expect from the game, as they see a fairy flying in the air, seeking to claim the Enchanted Crystals as her own.

The symbols that will be appearing across the ways to win and the slot machine’s reels include a troll, fairies, pixies, butterflies, ancient trees, the Enchanted Crystals, and poker card icons.

The game’s betting range starts at 0.01 and ends at 100. There are no betting variables, as players will choose one of the fixed bet values that are found under the reels.

The enchanted crystal is the wild icon of the game that will use its enchanting powers to replace other icons on the game’s reels. It will not replace other special icons. It can also appear and expand on the 3 middle reels to give players multiple winning chances, as well as triggering one re spin for each expanded wild reel.

The Troll icon is the bonus symbol, three of these trolls would trigger the bonus round. Lastly, there is the free spins round that would be triggered by 3x butterfly symbols.