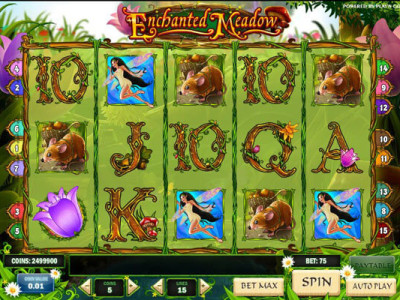 Enchanted Meadow is a Play n Go powered pokie that has 5 reels and 15 bet lines. It is a game that is filled with fairies and magical creatures from a fantasy land. Players will be taken into the enchanted meadow world where the entire world and the leaves of grass are all controlled by the magical powers of the fairies. Players will spin the reels, like any slot machine, but players will always be waiting for the fairies to take over and use their marvelous magic to take over the game and make the game play more fun, and more rewarding.
The game creates the world of the enchanted meadow through the amazing visuals and sounds of the game. Apart from that, the game is pretty rewarding, as mentioned with the help of the fairies, and the great special features that the Play n Go pokie has in store.

Enchanted Meadow is a pokie with an enchanted magical theme that does not only offer a high quality experience, but an immersive one. This is because whenever players have a seat and spin the reels, they will feel as if they have been taken into a movie that is about fairies. The presentation of the game and the visuals and sounds would make this a memorable experience. So get ready for a joyful and a one of a kind journey, powered by Play n Go. Give the game a test drive right here for fun, before you can start placing real bets at any of the online casinos that we recommend that offer the game.

The theme of the game is inspired by fairy tales, as it invites players to tag along for a ride that takes them into the world of the Enchanted Meadow. This world is infested by fairy tale creatures and the fairies that control the entire world. They even control the game play as they can interfere and give players great rewards and make the entire experience more fun.
The game’s visuals and sounds are inspired by the land of make believe and fairies. The symbols include multiple fairies, the Fairy Queen, magical fairy tale rodents, an ancient magical tree, poker card icons made out of tree barks and more .These symbols will appear spinning across the game’s 5 reels and the 15 bet lines.

The fairy tale themed pokie has a wild icon that replaces all other symbols, which is the ancient magical tree. It will not replace the scatter or the bonus icons, but it can give great payouts when matched on the lines.

The scatter icon is the fairy queen. She will give scatter rewards that can amount up to 50x the placed bet. Lastly, the magical purple flower is the bonus icon. Three of them would trigger a bonus round through which players can earn great prizes and free spins during which, 2 scatter would trigger a multiplier that can reach 5x.