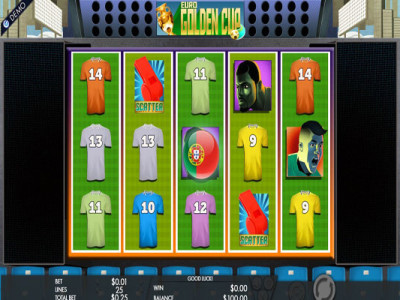 Euro Golden Cup is one of the newest Genesis Gaming powered machines to be released to the online gaming market. As the name of the slot indicates, the game is about soccer and this is why it has instantly become a players’ favorite, especially among the soccer fans around the world. The game takes players to the soccer field where they will join a group of players from different teams for a one of a kind experience that comes packing many wining chances. The game can be played right here for free as we host this Genesis Slot for free with free money so players can get to give it a spin for fun before they start putting real money wagers at internet casinos.

Euro Golden Cup is a Genesis Gaming slot game that packs many winning chances for players to take advantage of as well as special features, which is something to be expected from a Genesis Game. The slot also comes in great visuals that will entertain players and drive them deep into the soccer theme of the game for the ultimate football themed experience.

The game is one of the latest games to be added to the rich and varied portfolio of Genesis Gaming and it has already gone live at many online casinos.

Euro Golden Cup is a five reeled game that has a total of twenty five wager lines that players can place their desired stakes on. Players will do just that under the reels as they go through the 2 betting variables that the game has. These betting variables are the number of lines and the coin value.

The game has a soccer theme, which is clear from the title that Genesis Gaming has chosen for the game, as well as the visuals of the game. This is why online gamers will see that the reels and the 25 lines of the game are located in a soccer field with shiny lights around the reels. As for the symbols that are going to be landing across them, they include a golden cup, a soccer ball, a referee’s whistle and different players from different European teams.

The betting range is the game results from a couple of wagering options, which are the number of lines (1 to 25) and the coin value (0.01 to 10). This range lies between 0.01 and 125 credits for each single spin of the soccer reels.

The golden soccer ball is the wild symbol of the game that would act as a substitution icon for all symbols, except the scatter icon, to help players form a combo of matching icons across the lines of the pokie. This wild icon can appear on all reels, except the first one. The other special icon is the scatter red referee’s whistle that can trigger scattered rewards, plus activating the free spins of the game.