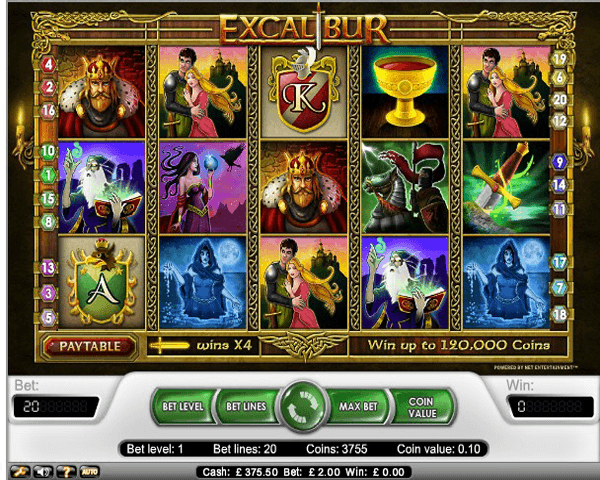 Excalibur is a five reeled video slot machine that offers twenty paylines. The game has a long list of high paying and rewarding features. For example, the game has a scatter symbol which is the Golden Chalice. This symbol reward players with payouts when a minimum of two symbols appear on the reels. The game also has a wild symbol, The Excalibur sword which can appear on the 1st, 2nd, 4th and 5th reels and it can substitute for any other symbol to create a winning combo.

Excalibur is a video slot game that is themed around the legendary sword of King Arthur, the Excalibur. It is about the king and his story with the Sword in the Stone. The game also has a magical theme as it merges magic with history to form this elegant and quirky video slot machine. The quality of the symbols is outstanding and the design of the entire game is terrific. The high quality of the visuals is accompanied by digital sound effects and a long list of bonus rounds. All of this does not come as a surprise as the game is powered by Net Ent which is known for its quality games and rewarding features and this game is exactly that. Since it is a Net Entertainment powered video slot, players can enjoy it at Mr. Green casino. As for players who want to play for fun without wagering real money, they can do that right here at Best Casinos.

The Excalibur, the legendary sword of King Arthur that was pulled from the stone, add to that a magical theme and wizardry and you got yourself an amazing game, this game is Excalibur video slot. The players will be immersed into the theme of the game and the world that it creates through the design of the game and the royally designed symbols that appear on its reels. Speaking of which, the game is presented to players in 5 spinning royal reels and 20 lines. This means that players have 20 different chances of winning. The symbols appeaing on those reels include King Arthur himself, the Excalibur legendary sword, a Wizard, a sorceresses, a young prince and his princess, a mighty knight, a golden chalice, a dark witch in the water and card symbols that are designed in a way to fit the era and the theme of the game.

As a Net Entertainment video slot, players can except a great selection of bonus symbols and special features that the game surely going to offer. The golden chalice is the scatter icon of the game. This symbol can reward players generous in the form of scatter rewards as well as activating the free spins round if a minimum of 3 golden chalices appear on the reels. The free spins are also accompanied by a multiplier. The Excalibur sword itself is the wild icon of this game. It can substitute for any other symbol except the bonus symbols of the game in order to help players in creating a winning combo of symbols.