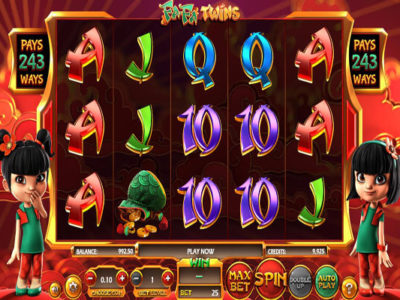 Fa Fa Twins by Betsoft Gaming is the newest pokie to hit the market. The game has a 5 reeled format with 243 ways to win for its players. The game has an Asian Chinese theme that will entertain and reward players throughout the game play. The game’s 3D visuals help in depicting the theme of the game, in addition to the great sound effects that the pokie has. All of this results in an immersive rider that is like none other. The best part about all of this is that the game can be checked out right here for fun. Therefore, players can check out what the game has to offer for fun before placing real money bets on it.

Fa Fa Twins is a 5 reeled game that hosts a total of 243 ways to win for players to take advantage of. The 5 reels of the game and its ways to win take players on a fantastic Asian themed adventure in China. Players will get to join the two Fa Fa Twins as they venture off into the Chinese civilization for a greatly rewarding ride that is like none other. This is why players will see an intro clip that is presented in 3D animations that shows the two Fa Fa Twins as they run across a magical realm, until the reels are created so players can start the game.

The visuals of the game are all outstanding, and they come in 3D which helps immerse players greatly into the Asian theme. This is why the reels and everything about the game is outlined with gold. As for the symbols, they include the Fa Fa Twins, the logo of the game, golden fish, a golden, a lantern, and colorful poker card icons.

The game’s wagering range of the game lies between 25 and 125, thanks to the two betting options that the game has. These betting options are the number of coins, and the value of the used coins to place the bets.

The game also has the Dual Reels feature, in which 2 reels will be identical and will spin in sync. This can spread in order to cover up to all 5 reels of the game. There is also the gamble game, the Double Up feature which allows players to double their wins.