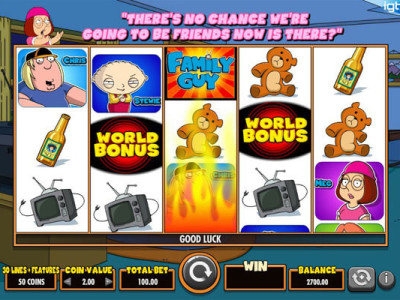 It seems today, that all you see, is violence and movies, and sex on TV. If these words mean something to you and bring joy, then you are a Family Guy fan. These are the first words that Lois says in the opening credit song of the animated TV show. IGT knows that Family Guy is one of the two most popular animated TV shows in the world, and this is why it has created this game that is inspired and themed around that popular show. So get ready to join peter, Lois and the rest of the cast in a gaming adventure of a lifetime that will always have you coming back for more.

Family Guy is an IGT slot machine that does not really need an Introduction. The game is about the most popular animated TV show, the Family Guy. So whenever players decide to give this amazing new IGT game a spin, they know what they are getting into. As the game takes them into the world of Family Guy where they will join all of its characters and enjoy listening to all of their favorite quotes as they spin the 5 reels of this game. Other than the cartoon-like symbols and visuals of the game and its sounds, the game really captures the attention of players as a result of is highly paying payouts and regular bonus features that it has in store for them.

Family Guy is the name of the slot, which makes it more than obvious that the game is themed around the TV animated cartoon show, The Family Guy. So through the lines and reels of this game, players are going to join Peter, Lois, Chris and the rest of the gang as they dive deep into the world of Family Guy where they will enjoy a one of a kind experience that is visually satisfying and well designed, and comes packed with plenty of great rewards. The game has a format that has 5 spinning cartoon inspired reels, which host a total of 30 bet lines that players will place wagers on.

The symbols that will appear on the reels include Peter Griffith, Lois, Maggie, Chris, Stewie and Brian, as well as Stewie’s Ray gun, a beer bottle, the TV, the World bonus icon and the logo of Family Guy.

Placing bets is done under the reels as players toggle through the betting options of the game that allows them to place a bet that varies between 50 and 2500 per spin.

Family Guy logo is the wild icon, like most IGT games. It will replace all icons, except the world bonus icon to help players form a winning combo and get paid. The World Bonus icon would act as a wild, but it will not replace the character symbols. The World bonus icon would trigger the World bonus round when 3, 4 or 5 of this symbol land on the reels. Players will spin the globe and one of 3 bonuses will be activated. These bonuses are The Drunken Clam, The Chicken Fight, and Lois’ Hot Free Spins.