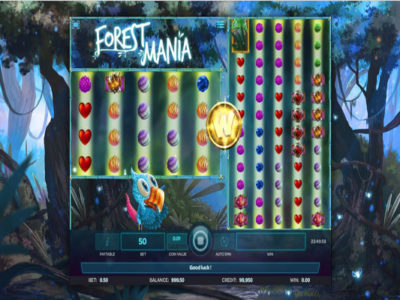 Forest Mania is a fantastic pokie machine that has a unique theme with a unique format. This format is highly entertaining and rewarding. The game is from the portfolio of iSoftBet, which is known for its innovation and high quality game. So players better be ready to enter a game play that is off the charts, that comes packing many winning chances.

The game takes players into the magical forest for a fantastic gaming experience. Instead of a simple 5×3 grid, the game has two sets of reels, which increases the winning chances of the players greatly. All of this has made the game quite popular amongst the players as soon as it got released.

Forest Mania is a fantastic and a magical game. This is because the game takes players to a magical and a mystical forest where they will meet different magical creatures for a wonderful ride. Players will find two sets of reels that have a lot of mysterious fruits, and creatures appearing as symbols. These symbols can give players tremendous rewards when matched on any of the two sets of the reels. The game can be played across multiple devices so all players can enjoy the experience.

The game has a 100 lined setup, but what is unique about the game is its reels. This is because the 100 paylines of the game are spread across two sets of reels. There is a 5×3 grid on the left, and a much bigger grid of reels on the right. The symbols that will appear on the reels of the game depict the different fruits that are found in the mystical forest. There are also the creatures that live in the forest. They also appear in 3D animated characters on the left side, looking upon the big set of reels on the right.

The game’s wagering range is between 0.50 and 100, thanks to the betting options that the game has. These bets can be placed underneath the reels at the control panel of the game.

The game has the wild critters. These wilds re going to substitute for any of the other icons appearing anywhere across the game’s screen, to help player in creating winning combos. These wilds can appear anywhere on the two reel sets. Wild icons can help create decent payouts, but the other wild feature, the Wild Reel is a real treat. This is because this randomly triggered feature can turn entire reels wild, to help players form multiple payouts. More information regarding the different features and prizes of the game can be found at the paytable.